bringing attention to Green River and improving the built environment

We provide more options and spaces for social activities and cultural expression in order to attract and retain residents and visitors while improving the town’s built environment. We are determined to assist those who wish to rehabilitate their properties and provide spaces for social interaction.

Before it became Epicenter’s home office, 180 South Broadway sat vacant for a decade. Built around the turn of the last century, the building had previously been a block manufacturer’s office, bar and billiard room, and a storage facility. In 2010 Epicenter’s co-founders renovated the building with help from friends and AmeriCorps volunteers.

We chose to renovate this historic building not because it was an easy project, but because we saw the potential of Broadway. Historically the commercial and social hub of Green River, the street is home to some of the town’s earliest buildings and a few anchor businesses: Ray’s Tavern, Melon Vine Food Store, and Savage Territory Art Gallery. Unfortunately, many of the original storefronts on Broadway are in complete disrepair. We saw the renovation of our building as a new catalyst for improving Broadway.

To activate Broadway and raise funds for the building renovation and first two years of operations, we hosted two festivals: Project Green River and Rock & Rocks. Project Green River revolved around one massive stage on the south end of Broadway flanked by the to-be-renovated Epicenter building and a full carnival. Rock & Rocks took place one year later and was crowd-funded through Kickstarter with 80 backers. Epicenter timed the event to coincide with the annual Melon Days festival, an over-one-hundred-year-old Green River tradition.

The renovation, funded through a Rural Business Enterprise Grant from USDA and private match, was extensive: major foundation and footing repairs, a new roof and ceiling, new front and rear facades, and much more. The building now acts as the Epicenter headquarters, housing all of our day-to-day activities.

Cleaning up the Epicenter headquarters

Baller's Ball, a festival outside of Green River organized with the Jenkstars

To continue the Broadway revitalization efforts, Epicenter facilitated the installation of window displays in vacant storefronts on Broadway in 2013-14. The displays brought positive attention to Green River’s business corridor, created momentum for the larger Green River beautification efforts, and elevated community spirit. In these windows, we displayed works of art, historical photos, information about local tourist destinations and environment, and other pieces that highlight the community and its history. Displays rotated on a one to three month cycle and were installed and created by Epicenter’s Frontier Fellows, town citizens, high school interns, and other interested individuals.

Initiated by Epicenter, and made up of motivated local residents and town officials, the Green River Improvement Team (GRIT) aims to beautify the community and build community spirit with as much vigor as the group’s name implies. GRIT has prioritized projects that create a more inviting town, improve the appearance of derelict properties, and bring community members together to improve this place we call home. The group also installed benches and decorative planters on Main Street, refurbished the locally-crafted and hand-painted “Welcome to Green River” sign, installed Spanish Trail silhouettes, and facilitated many volunteer cleanups like Brooms on Broadway.

For many travellers Green River has always been a point on the way to another destination. But today with I-70 bypassing Main Street and gas stations on the edge of town, thousands of people “visit” our town each day without ever seeing the community that exists between exits 160 and 164. In 2014, we counted the number of daily cars that stop at gas stations on the exits, then counted the number that went into town instead of getting right back on the interstate. We found that 65% of interstate travellers that stop in “Green River” never actually come into town. As a part of Epicenter’s mission to bolster economic development and facilitate community pride, we have started to leave “breadcrumbs” for drivers to draw them into the town’s core.

With this in mind, designer Lisa Ward proposed to refurbish old and create new neon and lighted signs along Green River’s Main Street. Ward proposed 10 different designs to the community and ultimately two were selected: a new neon welcome sign for the west side of town and a new neon artwork on the west side of the Coffee Shop. In addition to leading visitors to town to patronize local businesses, the sign builds on Green River’s classic neon signs and celebrates the local landscape. The design was created with the help of Green River High School students who were tasked with drawing their own signs, many of which were similar to the final design depicting Gunnison Butte. This welcome sign has already become a point of pride for local residents and a popular attraction for visitors.

The neon sign on the side of Green River Coffee Company features a quote from Edward Abbey's Desert Solitaire, reclaiming our town's isolation as a point of pride and source of inspiration. Both signs were unveiled at an event called Ignite the Nite hosted by Epicenter and the City of Green River at the city safety building on Broadway. Ward and fellow artist Marisa Frantz put on a pyrotechnics show to kick off the event, culminating in the lighting of a bonfire in front of the firehouse. Inside, Clive Romney of Utah Pioneer Heritage Arts, with Hank Mason and Jana Wells of Grand Junction performed original songs of Utah’s rural heritage, pioneers, and folktales; local residents contributed chili, hot cocoa, and their voices to the sing-alongs. 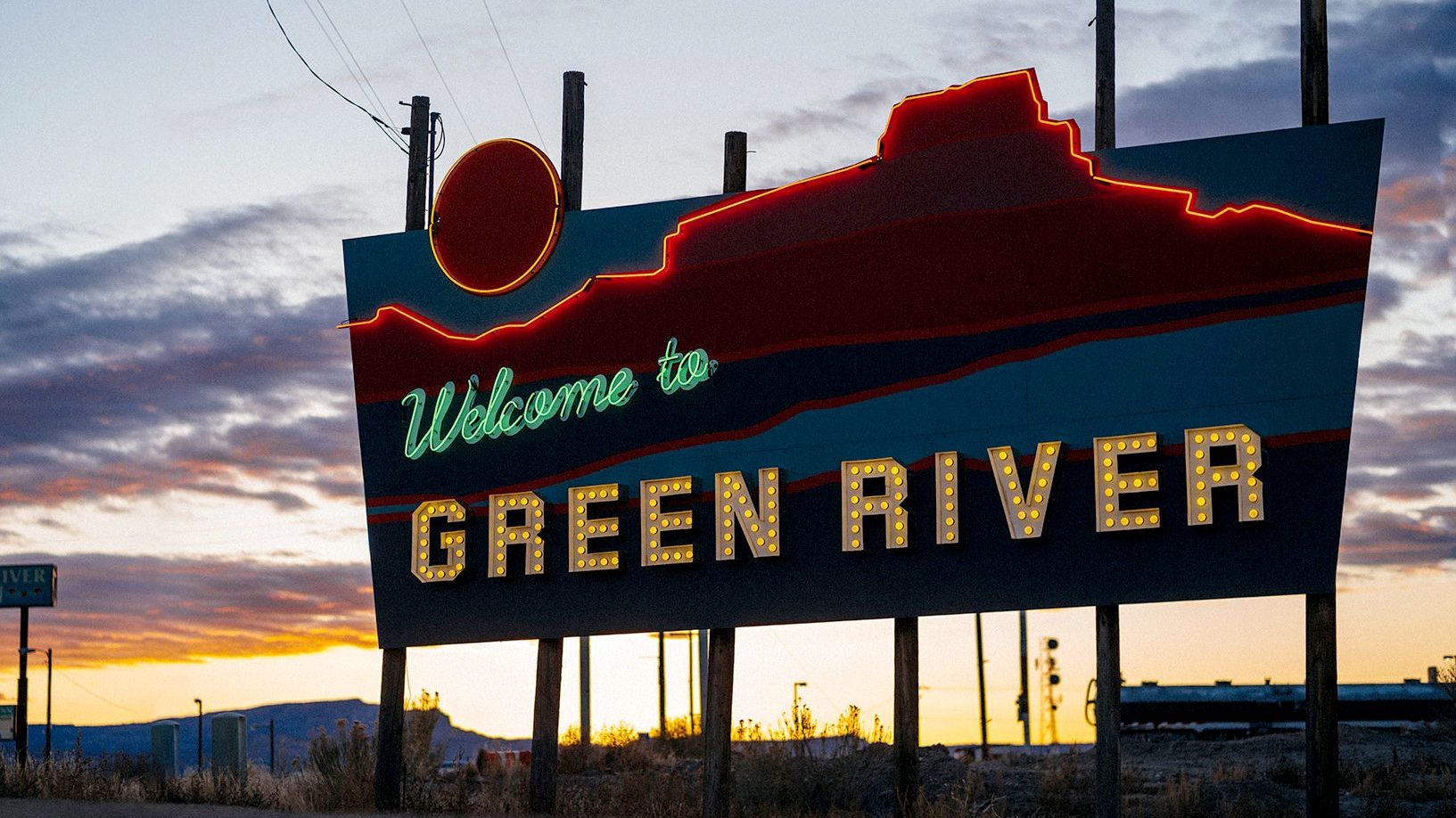 A GRHS student drawing that inspired the final design

Edward Abbey's quote and Lisa Ward's design installed on the side of Green River Coffee Co.

Waypoint: Green River was initiated by Epicenter, in partnership with the City of Green River to map a detailed plan for the future of downtown Green River. This document, made possible by input from local residents, looks at our history, data, and neighboring towns to outline recommendations for appropriate reinvestment in Green River’s downtown. This plan was shaped through surveys, large community meetings, conversations with partner organizations, and focus group discussions. As with other planning studies, it is intended to be a working document that we can refer to for guidance in the redevelopment and rejuvenation of the downtown area.

The document first focuses on Green River’s past and present, current assets and challenges. A description of what downtown revitalization can do for the future of Green River comes next, followed by a summary of downtown’s past and the forces that shaped it. A brief narrative on the planning process steps follows this, which leads to a description of the overarching principles or “big ideas” the community’s input led to. That insight gleaned from the community is then reflected in suggestions and recommendations for downtown improvement, which are separated by theme. The final, and largest part of the document, is an appendix filled with short downtown development resource guides, further documentation of the public input process, and more studies that analyze and demonstrate the town’s built and cultural character.

Download the plan here or order a physical copy here.

A spread of Waypoint identifying key areas in town

A 3D model of downtown created for the charettes

To get a different view of downtown, we took a few community members on a mule ride through town to discuss their vision for downtown

Waypoint guides Epicenter's work to revitalize downtown and has shaped projects in the year since its creation. A few items within the plan have already been completed, but much of the plan will be implemented beginning in early 2018 with the formation of a Downtown Steering Committee facilitated by Epicenter’s incoming Enterprise Rose Fellow. In the meantime we are working with the City, Better City, and property owners to take small incremental steps. For example, we recently installed lighted benches on Broadway (designed by University of Utah architecture student Waly Pont) and completed the transformation of one vacant, hazardous lot into a labyrinth to be used as a public meditative space by Frontier Fellow Katie Hargrave.

With the City’s recently-established Regional Development Agency we’re exploring new possibilities such as mixed-use development on Broadway. But as with our past, our future will be shaped by the people of Green River and will only be possible with the help of local leaders, many of whom have recently approached us to begin developing their properties on Broadway and Main Streets. 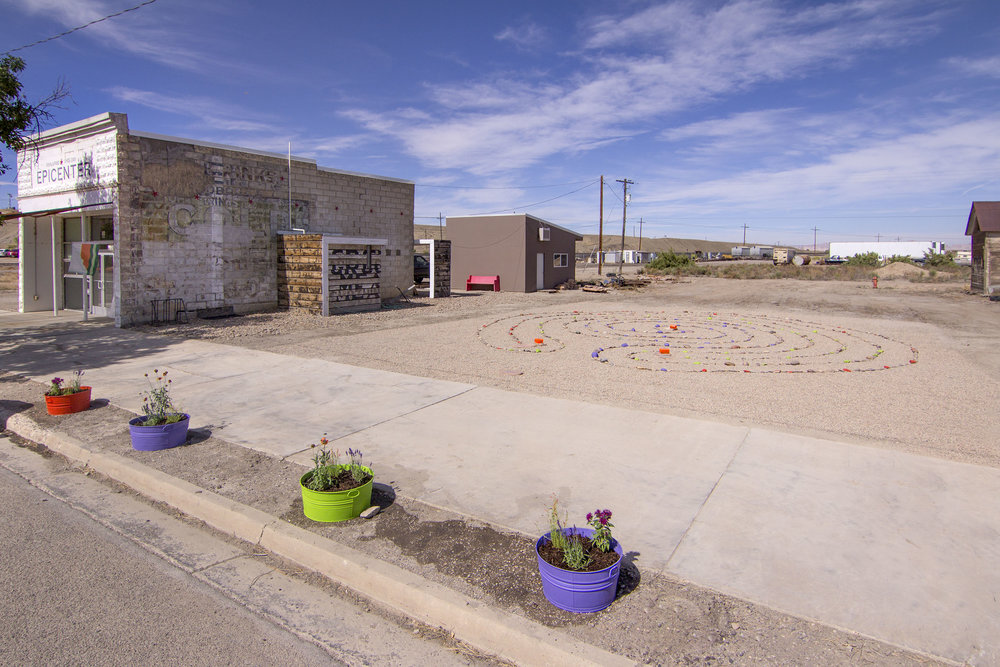 The finished labyrinth next to Epicenter 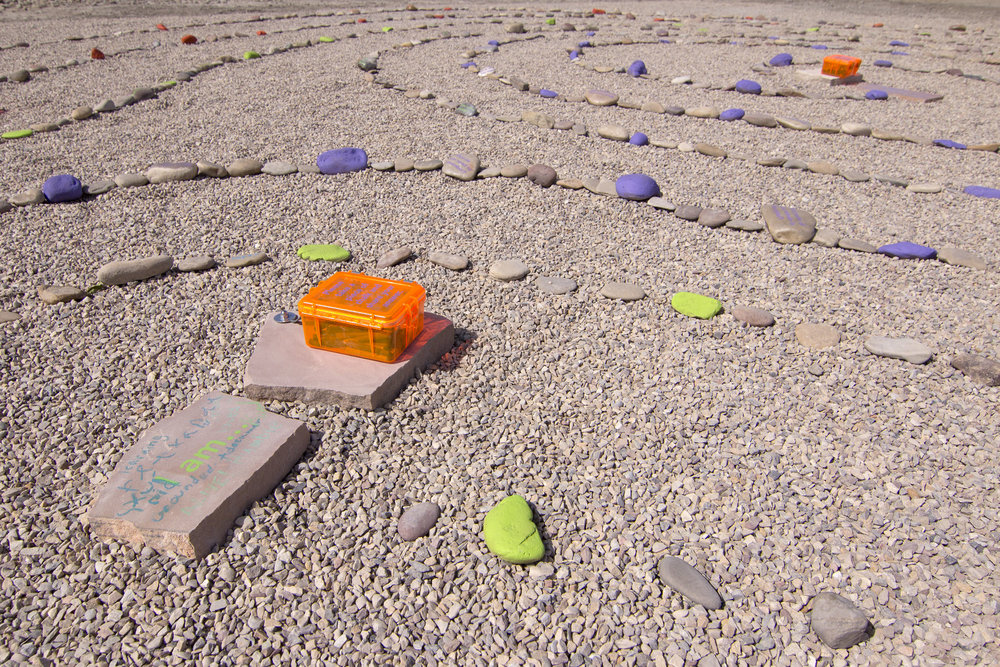 Three sections encourage walkers to contemplate their past, present, and future