Below is an account by Bryan Brooks, a current Epicenter summer intern, of our recent collaboration with DesignBuildBLUFF:

For two weeks Armando and I got to be American ambassadors. We acted as chauffeurs, construction advisers, language assistants, and cultural intermediaries for fourteen Japanese graduate students from Hosei University in Tokyo. They came to Utah for a design/build study-abroad excursion hosted by the University of Utah’s DesignBuildBLUFF program located on the northern border of the Navajo Nation. They came from diverse backgrounds, some studying architecture, some urban design, some systems design. Two grew up in Mongolia, one in China, one in Jersey (the one with the shore). Some could carry on simple, slow conversations in English, some knew choice phrases, and some didn’t speak English at all. Each left a little more knowledgeable about the United States—particularly the Four Corners region of the Colorado Plateau—and the advantages, challenges, and process of both designing and building a project from start to finish.

Our whirlwind tour began with stops at the Great Salt Lake, including the Spiral Jetty and Antelope Island. The students and I stood enraptured at the vast expanse of water, the crusty, crystalline surface underfoot, and the great billows of foam blowing across the beach. Here the selfie-stick emerged. If I can generalize one thing about the group, it’s that the love their selfies. There can never be too many.

But it was time to leave the Great Basin behind. The next day we drove south—stopping in Green River for lunch (at the Tamarisk!), and Arches for more selfies (with Landscape Arch)—to Bluff, a tiny but picturesque hamlet six hours drive from Salt Lake City. There the DesignBuildBLUFF campus consists of a turn-of-the century sandstone pioneer home and various outbuildings, sheds, and sleeping quarters constructed by DBB students over the years. Atsushi and Hiroko, DBB program coordinators, made us delicious homemade pizzas, evidence of more great meals to follow. 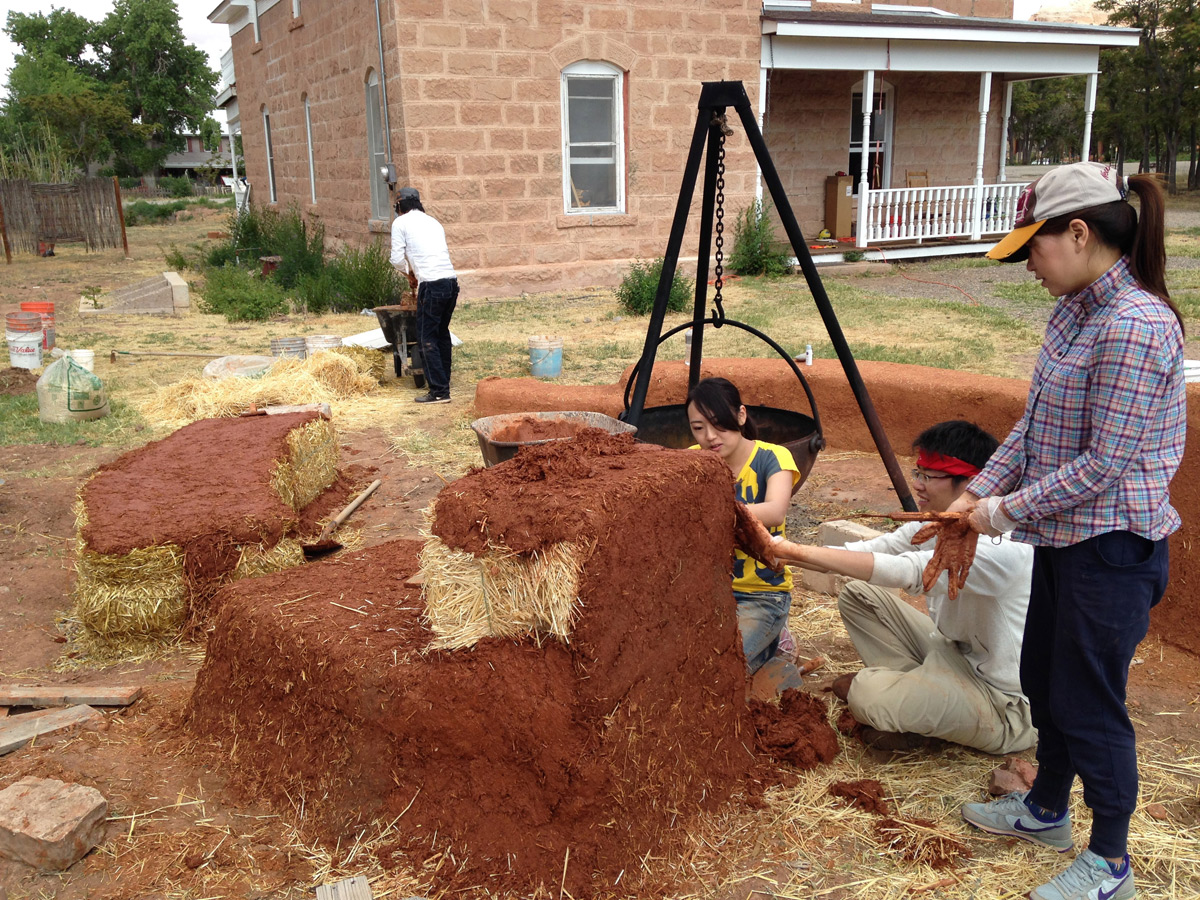 At Bluff we were introduced to the DBB program and toured several past housing projects built by University of Utah and University of Colorado at Denver students for families living on the Navajo Nation. Then it was the students’ turn to design something and get their hands dirty constructing it on the DBB campus. The student’s broke up into three teams: one designing a new bench around an existing fire pit, the other two designing water catchment systems at outdoor spigots. The bench team had a good idea of what they wanted to do and how to do it from the beginning: they used a mixture of straw and clay applied to hay bales to create a semi-circular shape. This construction method is particularly effective and appropriate for the Four Corners’ dry climate and uses local clay. 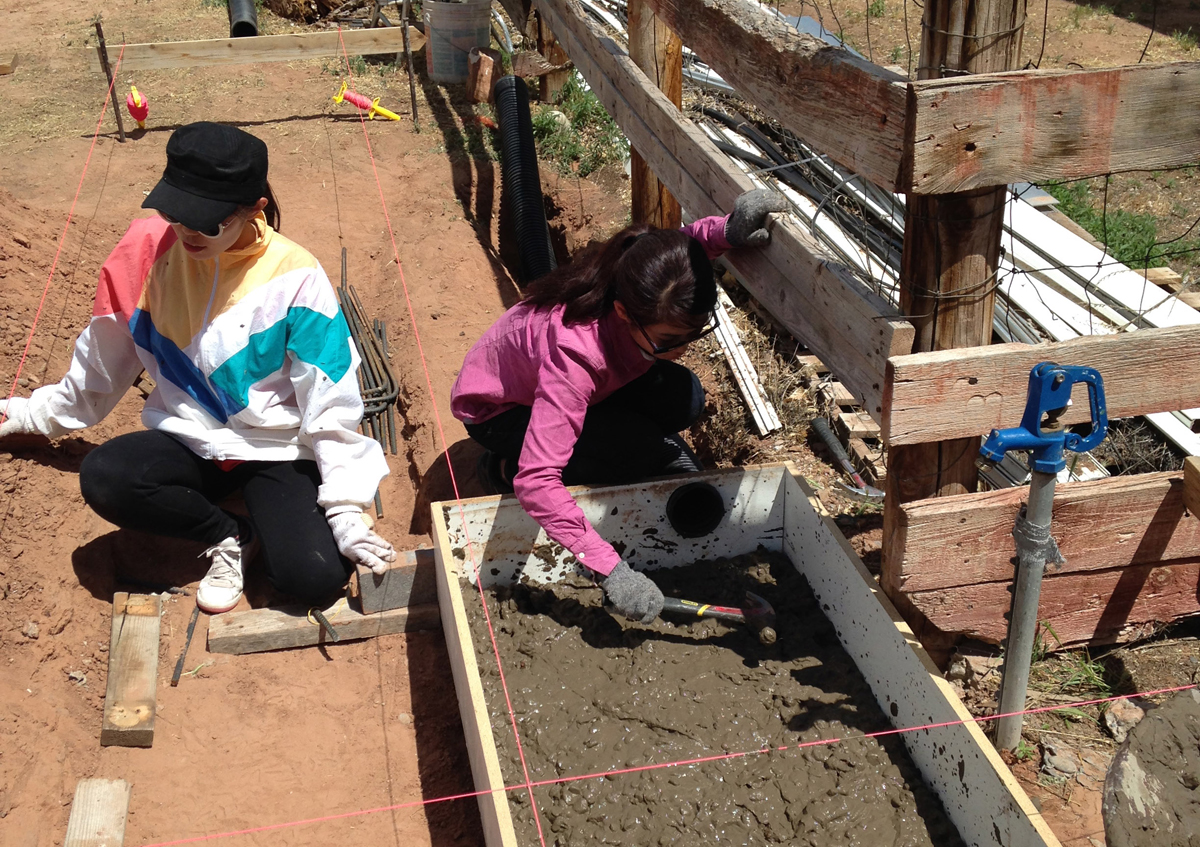 The spigot teams had a harder time deciding on a design, and both went through several iterations of ideas and even substantially changed the design well into construction. Both teams worked with concrete which is a less forgiving material than straw and clay, and they learned the importance of working with the right water-cement-aggregate ratio and that good concrete is only as good as its formwork. In the end each project turned out nicely, and all the students came out of the program knowing much more about materials, construction, and working together to design and build.

Over the course of our week at Bluff we also had a little time for fun, including hikes to ancient Pueblo ruins, poker nights, Frisbee throwing, and Japanese lessons (I can now introduce myself and thank the farmers for the harvest before I eat a meal).

With the projects completed, we took time to sketch them and the surrounding campus before celebrating with a party and corn-hole competition (unfortunately both American-led teams lost). And then it was time to say goodbye to Bluff and take to the road again. To finish the students’ tour of the Southwest, we stopped at Mesa Verde National Park, the Grand Canyon, Hoover Dam, and Las Vegas. 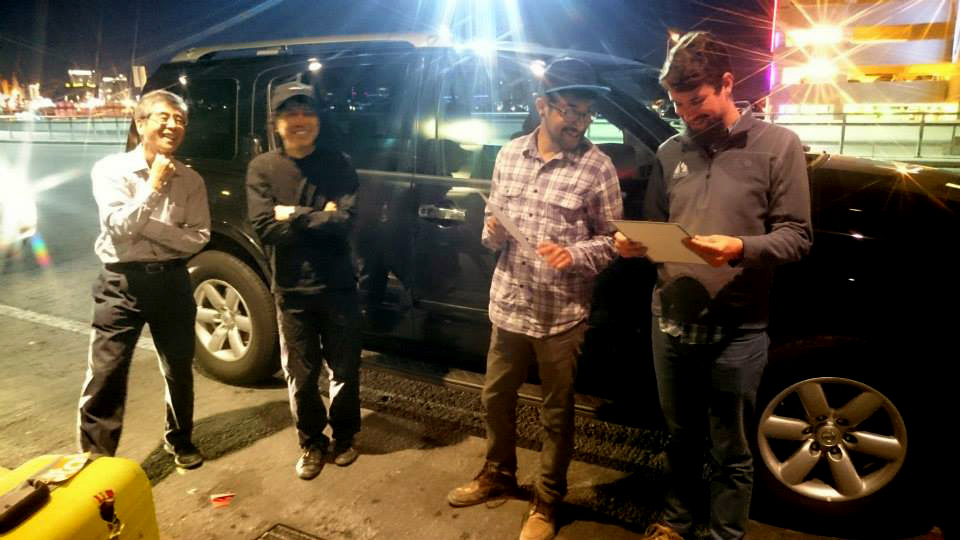 For the long drives I had the Japanese be DJ, and aside from some songs from Miyazaki movies we got back American pop—even the Japanese love Taylor Swift. After a late-night driving tour down the Las Vegas strip, breakfast-for-dinner at Denny’s, and a few hours of sleep, we shuttled the students and their luggage to the airport under the still-dark 4AM sky. Before we parted the Japanese gave Armando and I a thank-you card that each student had signed, and then we said goodbye to each of them: Ryosuke, who was brave enough to start a conversation with me the first day, Tulga, the Mongolian who holds himself like a prince and declared authoritatively, “I will come back,” Yusuke, who told me all the good spots to go hiking in Japan, Aran, who taught me Japanese, Keiichi, our interpreter from Jersey, and all the others. I miss them all dearly.