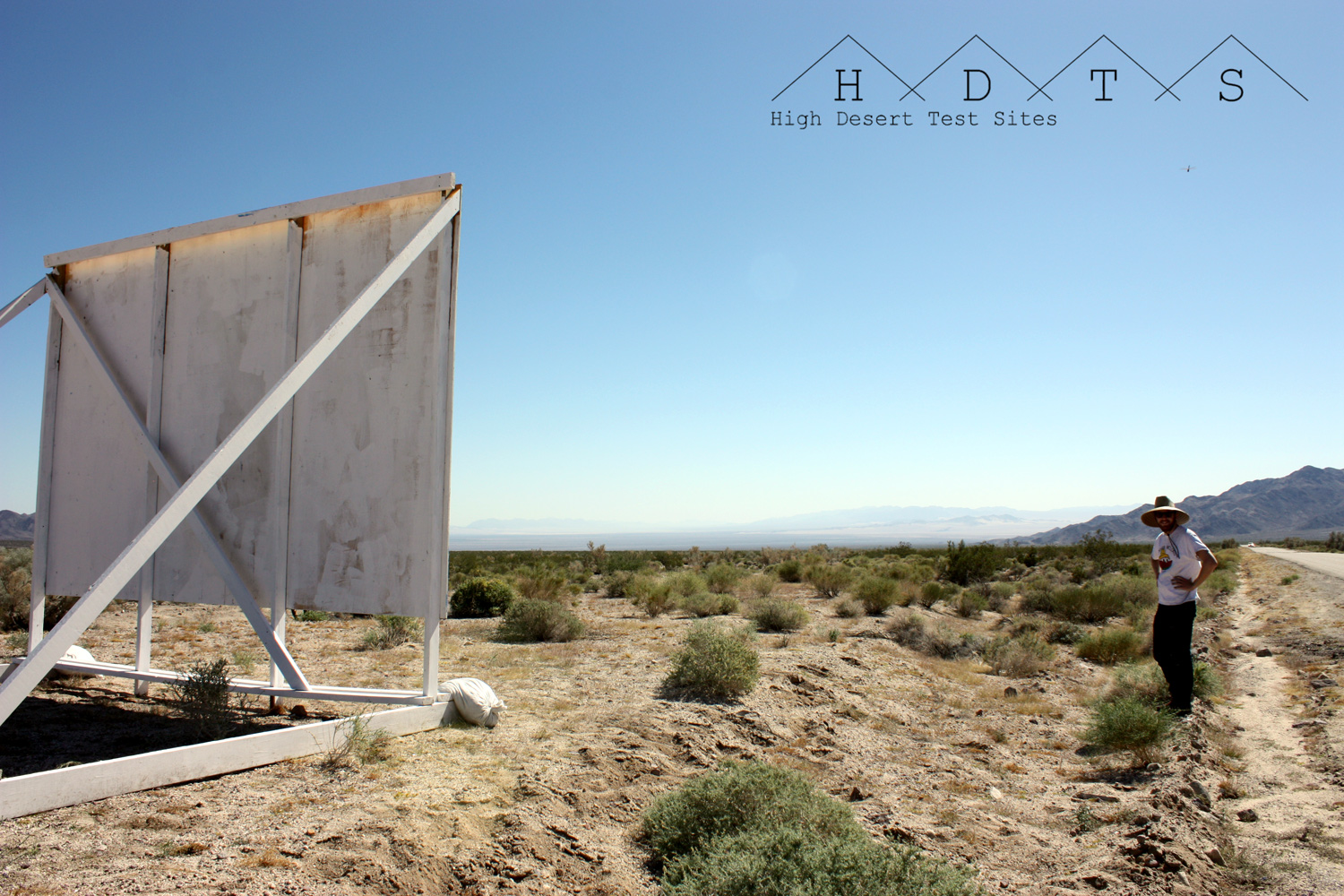 Leaning against the bed of the old pickup truck, I watched as a train of bikers blew past us, their heads turning one by one to take in the blue sign perched atop sand. We were parked along Kelbaker Road just outside the Mojave National Monument and our presence in the arid desert landscape must have appeared as if a mirage to the clad-in-black riders. Little did they know their answer would come just five miles further down the asphalt roadway. “How do billboards talk?” Well. “They use sign language.”

“Next Punchline 30 Miles” by Bennett Williamson

Started in 2002, “High Desert Test Sites” is based in Joshua Tree, California, with a mission to support experimental art that engages with the local environment and community. This year, they decided to create an art event larger and more ambitious -a 1,000 plus mile long journey along the roads of the Southwest from Joshua Tree to Albuquerque, New Mexico. Hundreds of artists from around the country submitted proposals for the event and almost sixty were selected to install their pieces, serve their food, share their goods, and perform along these desert roadways. One such artist to be selected was current Epicenter Frontier Fellow, Bennett Williamson of Los Angeles, California. His piece, entitled, “Next Punchline 30 Miles” was located just east of Amboy, CA between I-40 and Route 66. Two handmade billboards –the first a set up to a joke, the second the punchline –(designed, constructed, and painted here in Green River!) were placed roughly five miles apart on a desolate desert highway. Bennett described the joke as, “a real stinker,” and was inspired to create them in an “attempt to create a bit of absurdity for the passing audience captive in the ennui of a long road trip.”

What intrigued me most about High Desert Test Sites was how it took people out of conventional galleries and placed them in natural areas to interact and experience art. As Andrea Zittel, artist and co-founder of HDTS, commented, these projects are putting “art in places one normally might not even think to look.” The open space and vast views created an atmosphere of inclusion between viewer, artist, and art. Individuals had to commit to making the long treks through arid lands to find certain sites, some only in place for a mere day. From the Joshua Trees to the Book Cliffs here in Green River, landscapes are in a constant state of shift. The fleeting art of HDTS actively reminds one to be present. One day I found myself at “Magnetic Influence” witnessing viewers dressed in large elastic clothing wrapped around boulders, an ode to Franz Anton Mesmer’s (1779) philosophic belief that all bodies are subject to the gravitational pull of the heavens. Another day I walked up to a pop-up storage unit masking a Volkswagon bus, a creation by Lars Fisk, who through his own discrete minimalist housing is exploring the significance of personal storage units across the United States. If I had returned the following morning to either site, not a trace would be left of these detailed art pieces.

Part of HDTS 2013 seemed to be focused at celebrating the diverse desert habitats of the southwest –just getting people out there to see space for themselves. Their mission and work was, and is inspiring. They write, “To create a ‘center’ outside of any preexisting centers…To contribute to a community in which art can truly make a difference.” Who knows, maybe Green River can be a stop along the caravan next year? I sure hope so. 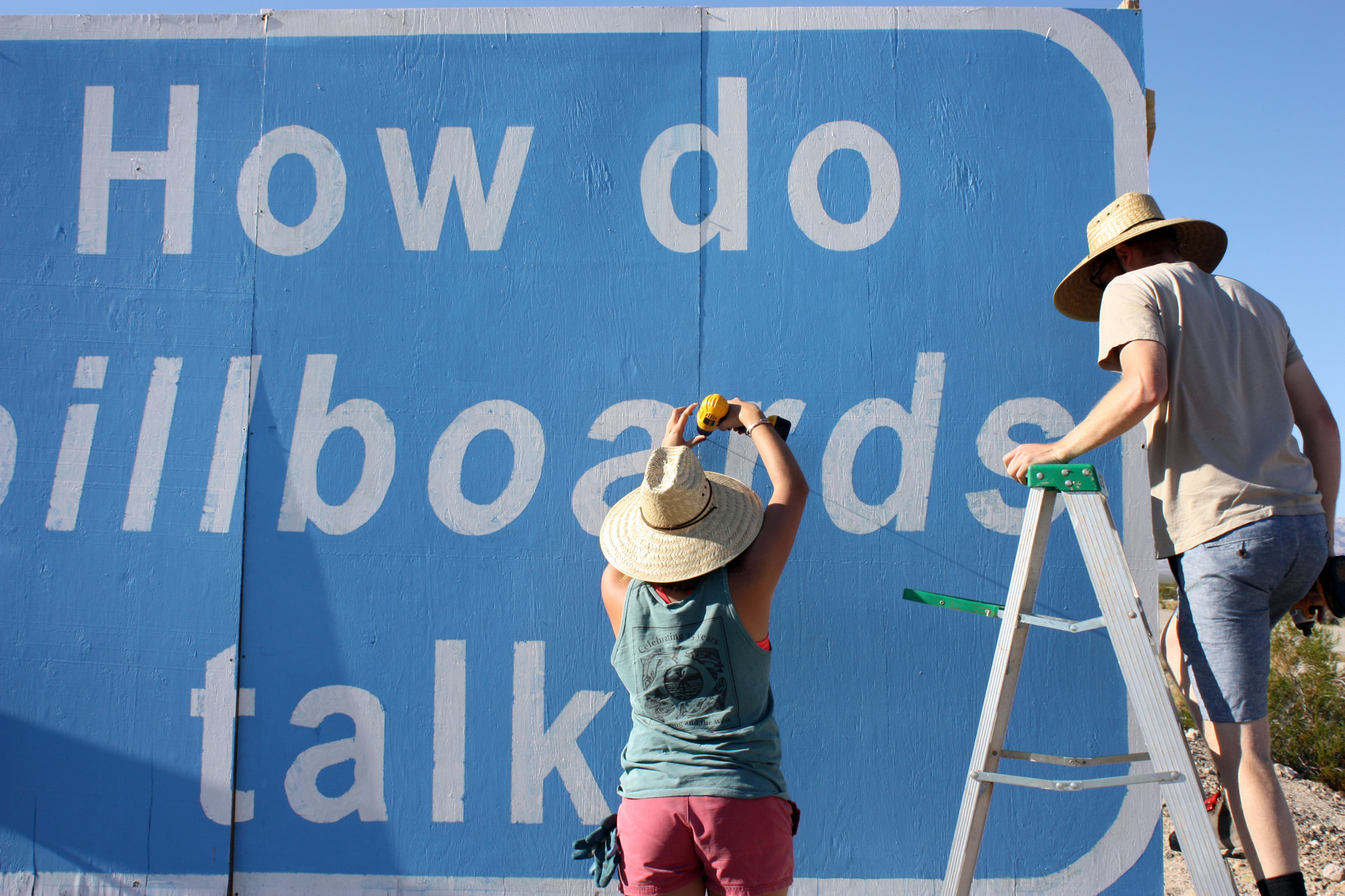 Special thanks to Aurora Tang and Andrea Zittel for being welcoming and sharing A-Z West and HDTS. Big gratitude goes to Bennett Williamson for allowing me to help along this journey.

—
This post was written by Ryann Savino, an AmeriCorps VISTA here at Epicenter. Originally from the granite-clad foothills of Northern California, she first came to Green River in 2012 via canoe. A recent graduate of Whitman College, she wrote her Environmental Humanities Thesis on the Green River Watershed and her family history held within its silty flow.