Kenny & Zoe tabling for The Last Straw Journal at a community art market in Atlanta, GA.

Epicenter is so excited to welcome Kenny Fallon Jr & Zoe Gardner to the Epicenter team as Specialists! Please join us this Thursday (August 25th) from 3-5PM for a ‘lil welcome happy hour / meet & greet at Epicenter. Pop in even if just for a minute to meet Kenny & Zoe and have a drink! Below you’ll find their introductory interview of one another so that y’all can get to know them a little bit.

Kenny Fallon: Hey Zoe! So you were raised in Rome, Georgia, down the road from Howard Finster’s handmade Paradise Garden. How’s the desert been treating you so far, and how do you think the sticky South shaped you growing up?

Zoe Gardner: Hey Kenny! The desert is incredible, it’s a whole new world to enjoy. I love the dry desert breezes and big open sky. When I was little I sometimes felt like I wanted to escape Rome. It’s a small slow town in the rural South and I thought I wanted anything else. Around when I moved to Atlanta after college, I realized there were a lot of things I missed about Rome though. I always loved climbing the big trees in our backyard, porch sitting, river floating, and just being near moving water. As far as the local folk art environments go, I love the idea of using any materials around you to create a little paradise. Now, you grew up in a few different places around the South. How would you describe your origins and the impact they’ve had on your love of local histories?

KF: I think my interest in local history has something to do with wanting to feel rooted after moving around a bunch. Learning different local histories is interesting because you start to see some similarities and repetition in very different places, and so that’s kind of cool. Both sides of my family had been in New Orleans for generations and when I was little I never thought I would live anywhere else. Because of Hurricane Katrina my immediate family and I left and lived in Waller City, Texas, then in Morgantown, West Virginia, and finally in Birmingham, Alabama. I have also lived in Auburn, Greensboro, and Newbern, Alabama, and most recently Atlanta, Georgia.

ZG: This isn’t your first rodeo living in southeastern Utah. Can you talk about what it’s like to move from the high and dry desert to the lush Atlanta forest and back? What kinds of things have you learned living in such drastically different bioregions?

KF: From 2019 to 2020 I lived in Moab, and it was my first time in any place like this. I tripped out on the giant, exposed rock and the general awareness of the scarcity of water. Going back to the South, I saw how similar kinds of landforms exist down there, but they’re covered with plants and trees. Water is crucial and influences everything. Some similarities between the small towns that I’ve lived in are that more objects are reused and less buildings look like they’ve been touched by a professional architect, which I like. There’s a resourcefulness apparent in these places. Southeast Utah was the first place I’ve lived where there is still a visibly present and intact Indigenous nation, the Diné. This made me want to learn more about the Native groups that still live in some pockets of the South, but have mostly been removed to other areas, like the Muskogee. Zoe, with us moving here Green River’s collecting Auburn University alumni again. Apart from architecture degrees, what do you carry with you from the college days?

ZG: I treasure my memories of laying like a lizard on the rocks beneath the Chewacla waterfall, walking around Wright’s Mill Road, reading old graves in the cemetery on Armstrong Street, eating beneath the buck heads at The Hound, drinking upstairs at Avondale, and just being able to walk everywhere. I also enjoyed making things by hand outside at Rural Studio, where the isolation helped me focus on building relationships with people. My favorite part of school was definitely working collaboratively, especially on an adaptive reuse project for a new community space in Selma, Alabama. Your background is also in architecture and you spent your fifth year at Auburn University’s Rural Studio. What did your thesis teach you about affordable housing and doing work in rural communities?

KF: My thesis was part of the long-term 20K project, where the original idea was that the house would be affordable because of the efficient use of locally-bought materials, and a construction process that’s easy for less experienced people to follow. During the project I learned that the affordability of a house is more linked to the financing mechanism and the costs to heat and cool the space. The distance from hardware stores and the availability of local specialized workers affects how you design and plan a build because you want to be efficient with your trips to the nearest city.

ZG: How did you find out about Epicenter? What drew you into Green River, and what are you most excited to work on during your time here?

KF: I  met the people at Epicenter at a stand at Melon Days a couple years ago. Epicenter drew me into Green River, as well as the town’s scale, the lovely buildings, the constant views of the Book Cliffs and the Swell, and the proximity to the Green River. I’m super excited about the Why This Place? retrospective publication right now and I’m also excited to work on Canal Commons in as many ways as I can. I’m interested in what affordable housing development looks like in rural areas when you do more than one house at a time. What are you most psyched about working on at Epicenter?

ZG: I’m most eager to uplift cool creators when we send out the call for the Frontier Fellowship and I’m also eager to work on Pearl Baker Park. With that I’m really excited about teaching people about the landscape and our nonhuman neighbors in a playful way.

KF: Other than hanging out with our cats, Lina and Peanut, what do you want to do outside of work?

ZG: I want to eat a lot of watermelon, sit in the river, draw and paint these sick desert views, stick and poke tattoos, repair clothes, cook new things, go to nearby natural building workshops, build a cob oven, and keep designing and editing for The Last Straw Journal.

ZG: I think I may have been watching too much of The Sopranos…but I’m going to say “Woke Up This Morning” by Alabama 3.

KF: What cool artists and designers are you into nowadays?

ZG: I’m so inspired right now by the community that is coming together in support of the Welaunee Forest in southeast Atlanta. There is some incredibly meaningful work happening in defense of the forest. A grief altar was built, a transient “living room” was created by weaving fabric through trees that defines a space for embrace, powerful photographs of the community occupying the landscape are being taken, letters are written by those guarding the treetops, and so many more projects are ongoing that are directly inspired by the beautiful woods that are being threatened. What are three of your favorite books at the moment and why?

KF: Five of them are the first five books in Frank Herbert’s Dune series, although I’m about to read the sixth one. I feel like moving from Atlanta to Green River is like moving from Caladan to Arrakis, but I’m not sure what characters we are yet. The second and third books are The Dawn of Everything by David Graeber and David Wengrow, and Hinterland by Phil A. Neel. They’re great books to shake up your perspective on some big things.

ZG: If you could turn into any animal, what would it be?

KF: My first thought was to be a bat, because I see them at dusk and they’re so cute and I love the way they fly, but I’d still want to be able to see things. So I would want to be a bird. A chill bird to be would be a pelican because they live in all kinds of places and they seem pretty relaxed. 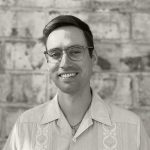 Raised throughout the South, Kenny Fallon Jr got fired up about affordable housing while designing and building a 20K Home at Auburn University’s Rural Studio. Since graduating he’s explored natural building at Community Rebuilds, project development at an AEC consulting firm, and publishing at The Last Straw Journal. Kenny’s excited about outsider art environments, reading by the Book Cliffs, and building the world we want to live in. 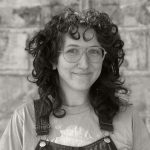 Zoe Gardner grew up where three rivers meet in scenic Rome, Georgia, and graduated from Auburn University’s School of Architecture. She recently relocated to Green River and is excited to create public spaces for gathering and nurturing community. Zoe also designs and edits The Last Straw Journal. She loves exploring new landscapes, learning about the natural world, and giving her friends hand-poked tattoos.