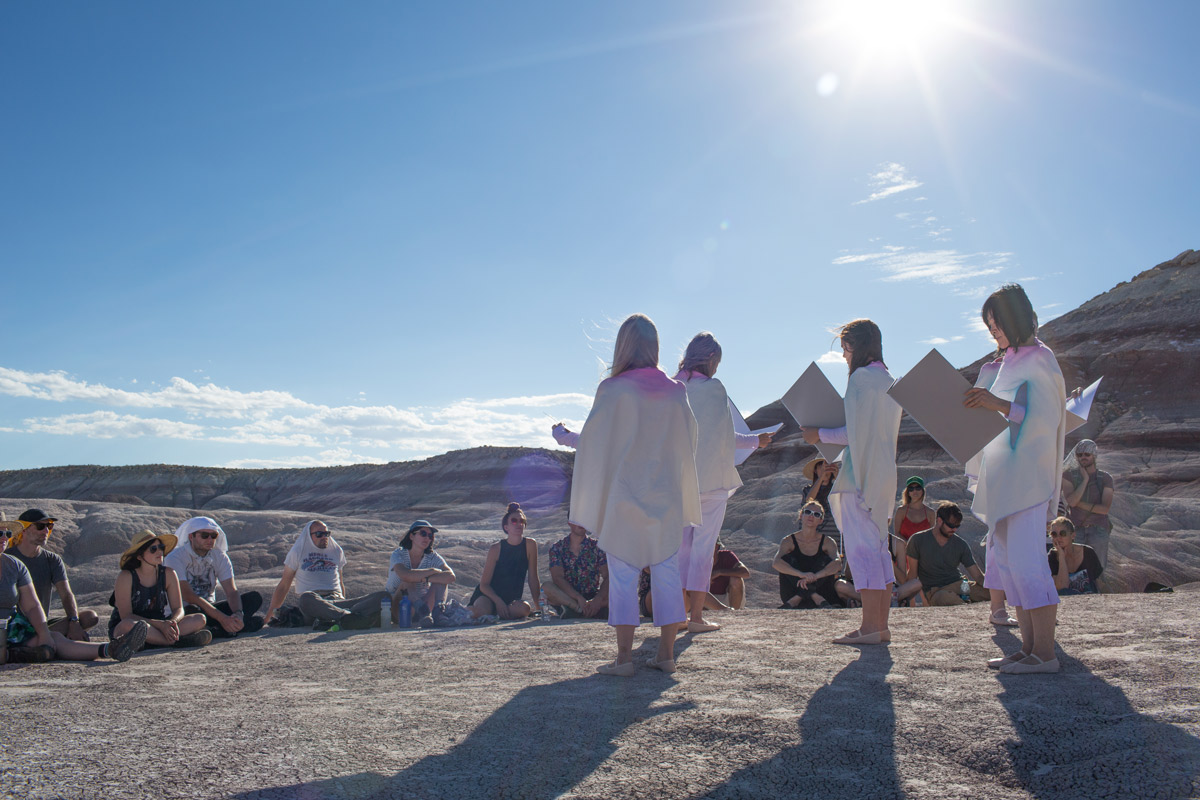 This weekend Green River welcomed over 100 visitors for HDTS: Epicenter. Twelve different artist groups from around the country showcased projects, installations, and performances in and around Green River, including folk ballads performed in Black Dragon Canyon, interactive hammock weaving (with corn stalks, no less!), and a chance for visitors and locals to be photographed with their car. The project was a collaboration between Epicenter and High Desert Test Sites, an arts organization based in Joshua Tree, California that has put on similar events in the past.

Things officially kicked off on Friday with a potluck and swap meet hosted at Epicenter. Over 75 people showed up to share food, meet new friends, and catch up with old ones. Several projects went on display, including Alyse Emdur and Michael Parker’s “Geyser Girls” drawing residency at Crystal Geyser and “Rural Light” at the Dunham Melon Stand, Jordan Topiel Paul and J. Gordon Faylor’s “Motel Room” installation at the Robbers Roost, Allan McCollum’s “Reprints” at the USU Eastern Prehistoric Museum in Price, and the Puusemp family’s “Gamma,” an installation that made radiation experienceable by sonically representing each radiation wave passing through a small area. Visitors passing through Green River for a pit stop got the opportunity to be photographed with their car as part of Nicole Lavelle’s “Autoland” at the Conoco Gas ’n Go. Those willing to get out of town could visit “Site Specific Hammock 2 and 3” by Bennett Williamson, a set of two hammocks which visitors could participate making by learning a weaving technique. One hammock was made of recycled fabrics, while the other was made from harvested corn stalks.

On Saturday visitors could catch projects they didn’t see the day before as well as attend a few unique events. Charlie Macquarie’s “Library of Approximate Location” was open at Swasey’s Beach, where visitors could peruse a unique collection of books and documents pertinent to Green River, Utah, and the Inland West. Butchy Fuego and the Seeing Trails Division of Fine Arts performed “Doppler” at the Municipal Airport: two trucks, one with Butchy Fuego and a drum kit, the other with Jeremiah Chiu and a keyboard, began at opposite ends of the runway and drove toward each other, meeting in the middle, creating a unique sonic experience for the stationary audience. Steve Badgett’s “River Quaternion”—a giant, floating black pyramid, sailed/hovered down the Green River from the Main Street bridge to the Crystal Geyser as the sun set. In the afternoon, a group of explorers left for Cabin-Time’s “Sleepout” at Wild Horse Butte—a no electronics, all-wilderness overnight experience, while those still in Green River attended the Seeing Trails DFA’s “Past on Present” projection and laser show/party at the Bunker.

Sunday began a day of travel and performances. In the morning, Alison Kinney, Daniel Nickerson, Cyrus Smith, and Matt Takiff gave a performance of folk songs and cowboy ballads in Black Dragon Canyon—the unique shape of the canyon enhancing and distorting the acoustics to create a magical experience. In the afternoon, visitors traveled to the Mars Desert Research Station near Hanksville for a performance of “Brainchild” Part 3, an otherworldly performance set among the alien earth formations that lie between Capitol Reef and the San Rafael Swell.

“Doppler” by the Seeing Trails DFA and “Desert Dreamscape” by Kinney, Nickerson, Smith, and Takiff (click to enlarge)

On Monday things began to wind down, but not before the Seeing Trails DFA led a hike around Blue Castle, a grey-blue monolith north of town. During the hike, visitors could engage with various viewing portals that framed different views of the landscape. The event officially wrapped at noon. Overall it was a highly successful weekend and a great collaboration with High Desert Test Sites.

HDTS: Epicenter was made possible with support from the National Endowment for the Arts (Art Works–Design), Andy Warhol Foundation for the Visual Arts, Utah Division of Arts and Museums, Emery County Travel Board, and the Sorenson Legacy Foundation.

Photos and video by Bill Morrison. Find more photos from the event on our instagram and at #hdtsepicenter.