Coming to Green River eight years ago, I had some (albeit not much) experience in the development of single-family affordable homes. I naively thought I’d build a house in my year as an AmeriCorps member and that would serve as a replicable model that could address the lack of affordable, durable housing that I was seeing as a newcomer to town both as I was welcomed into the homes of my new neighbors and as I researched the data from local and national sources that tracked housing affordability. For this replicable model, I looked for a family and found one; I worked with those kids each day in an after-school program and got to know them and slowly got to know the larger community. I realized quickly that one house was not going to be a game changer in Green River. This place, like any other place, had embedded within it well-rooted systems, biases, and preclusions.

In my opinion, the home (not the house, but the “home”) is the smallest unit of measure of a community. Its stability or instability affects the most vulnerable populations (children, the elderly, the disabled) the highest. I’ll focus on children, as they have the least choice in the matter of their home. A typical low-income family in Green River has both heads of household working. And typically these moms and dads work multiple jobs simultaneously. Jobs here are often minimum or below-minimum wage (minimum wage in Utah is already at the federal minimum of $7.25 per hour; hotels and restaurants are lawfully permitted to pay even less than that). Jobs here are also seasonally affected, with hours cut or layoffs made during the slow winter time from late October to early May. This coincidentally is the most expensive time to live in Green River, with high utility costs for heat (Green River has no natural gas; most families use propane that incurs dramatic price increases in winter) and nighttime lighting due to our latitude where the sun sets before 5 PM.

Should a family be cost-burdened, decisions are made that attempt to keep the household afloat. Rent/mortgage is paid first so that there is no eviction. Essential utilities next. Transportation to work is also a priority. Often that’s a car here, so there’s also state-required insurance, annual inspections, and passing safety inspections that may require repairs such as new tires or windshield replacement. Oh, there’s also food, of course. And clothes. These essential human needs (shelter, water, food, and clothing) can easily exceed what is available in a household that is spending well over 30% of their income on housing. This leaves parents to have to make inhumane decisions. Lower quality food (more preservative-based items, cheaper items high in sugar and fillers) becomes a requirement so that kids are not hungry. This poisons the metabolism and internal health of kids, affecting their lifelong health, making them sick more often as kids and setting them up for permanent health conditions.

Should families not be able to afford utilities and balanced meals, stress placed on the kids by being cold and underfed with poor diets leads to sleep-burdened nights and reduced mental activity that directly leads to poor educational achievement during the day at school. Compound that by our place, where there is one class per grade, and kids get left behind when they are not able to keep up. Now the child is poorly performing to the point that they do not have the grades to get into a quality higher education institution. They lose confidence as other kids tell them they are dumb and they start to believe it. Their potential job opportunities are narrowed to low-paying service jobs or high-risk positions. 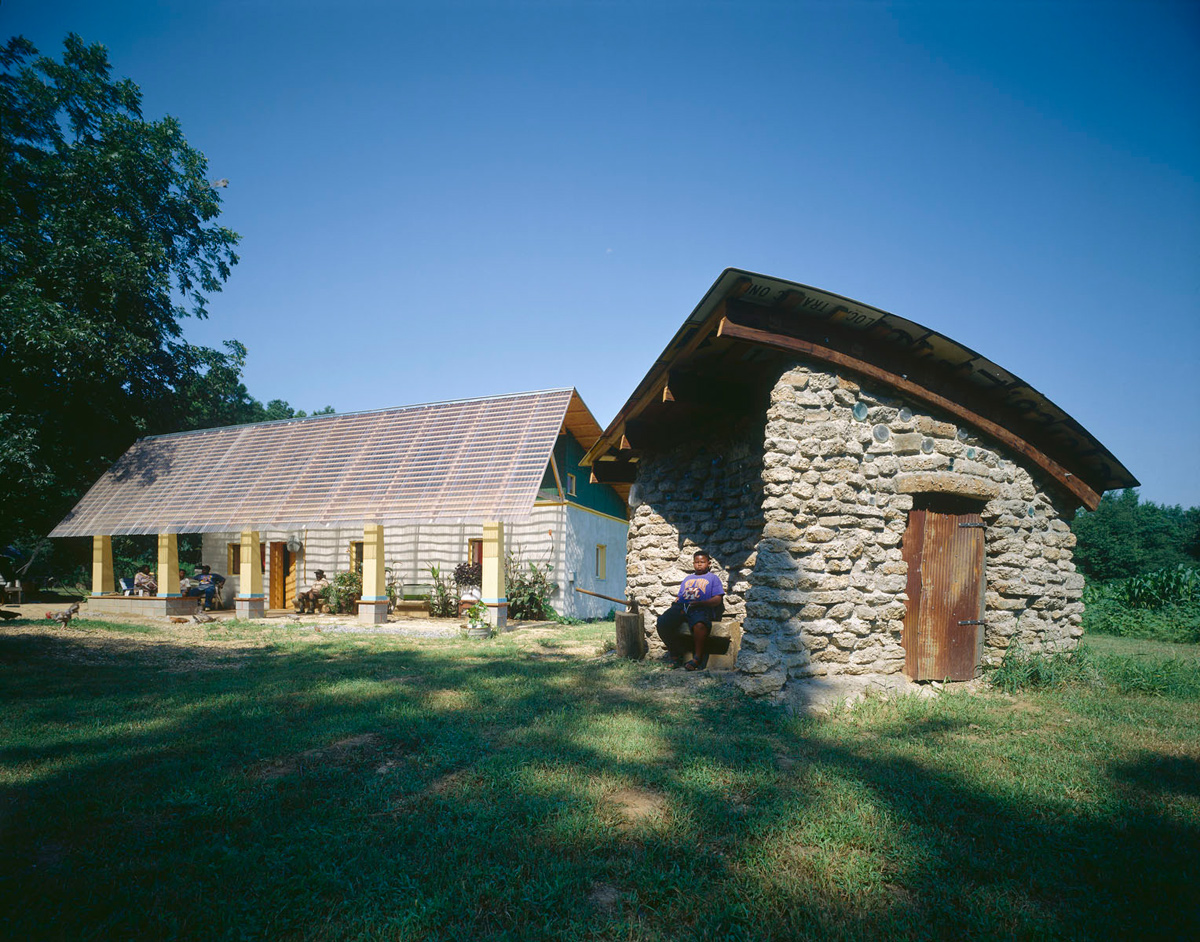 When I attended Rural Studio in 2004, I had to spend a week helping repairing a past project, as was the requirement for each student. It taught us to be stewards of the projects of Rural Studio and inherently spoke to the idea that things change in a home and we need to better predict that inevitable change. I helped on the Haybale House in Mason’s Bend, Alabama, Rural Studio’s first house. Since its completion ten years prior, the home’s owner had since had both legs removed due to diabetes (a disease directly related to poor diet). I worked with a fellow student and a Rural Studio staff member to take out the tub in the one-bathroom house and lay low-profile tile so she could roll into the shower. As we worked one day, a visitor arrived that turned out to be a grandson of the matriarch. I remember he drove a new model crimson Ford Mustang. On the front porch (in what he probably saw as small talk but I still recall vividly), he told me that this house had been important to him. One of the iconic “wagon wheel” sleeping nooks had been built specifically for him. For the first time, he told me, he had a place to come home to each day, the same place each day. Prior to that, he’d not be sure where he was to get dropped off at, his mom’s, his aunt’s, his grandparents’, his other aunt’s. There at this house, as a young boy, he had his space. He had a place he could do his homework (the nook consisted of a small twin bed and a desk). He told me that he had graduated from the University of Alabama and and was now finishing his law degree from the same university (even though it’s Alabama [I know the jokes], I’ll point out the law school at Alabama is currently ranked #28 in the nation). He said, directly and succinctly, that the reason, the reason, he was able to succeed was because of this house and how it was designed to provide for him a place to come home to each day after school.

I’ve heard, growing up, about the American Dream, the idea that everyone has the opportunity to be whatever they want if they just try, and about “pulling yourself up by the bootstraps.” What I have come to understand through working here with this community is that yes, in America, you can often improve your life and the life of your children. However, the opportunity for the “rags to riches” fairy tale is just that, a fairy tale. It happens rarely. More commonly, poverty begets poverty. Our American system today does not start everyone on the same playing field. I think we all agree on that. I don’t know, though, that everyone admits the cycle of intergenerational poverty is being predicted at birth. This prediction is possible to overcome, with diligence and, honestly, luck. But it’s a very steep hill.

A professor of mine at Auburn once said to me, “As you learn more, you’ll see that poverty is less a factor of an individual’s work ethic and more a result of circumstance.” We don’t choose for ourselves our ancestry, race, gender, socioeconomic status, sexual orientation, country of birth, familial religion, or any identifier that becomes either an impediment or advantage in our world. By chance, I was born to a loving, stable family in the suburban American South. My family, led by my small business-owning parents, were able to provide all that was needed and much that was wanted. By no choice of mine, I was born white, middle-class, and to a family that expected educational achievement. On my first day alive, I was far ahead other babies born on the same day to a different family and place, and by no effort of my own. As we all have, I’ve had hurdles to overcome. I made something of myself, from my advantage and from the stoic support of my family and community. I never had to be uncertain that my home would be there; I never was hungry. I took this all for granted. We all often accept as a default something that was in fact mere chance. Now, as we recognize and acknowledge this, we must do all we can to help level the playing field for our neighbors. My passion, where I see I can be most helpful, is in doing all I can to improve access to affordable housing for the most vulnerable populations. I work to eliminate substandard housing in Green River, my home that has been a place where I’ve built programming alongside the mayor, postmaster, grocery store worker, Chow Hound employee, West Winds waitress, hotel housekeeper, and hardware store staff member; I’ve been encouraged by them and they have taught me what works best to get things done in this unique place with our specific idiosyncrasies. We’ve developed together, as a community, a belief that affordable, decent, and even noble shelter should be a birthright in America, regardless of place, being, and circumstance.

Your passion and your role is different that mine, coming from your life experience and your place in your community. I look for your support in what I take on, and I hope to be a source of ardent encouragement for what you are able to do to positively affect the lives of your own neighbors. After all, we’re all stuck here together for a little bit, no one of us can do much alone, and in general we’re all willing to give of our time when we’re asked; we might as well learn more about each other, find out where each one’s passion lies, and together do something more than the status quo.