Video: “Instead of using matboard and paper to show my work, I coded my website to be run using the portfolio case itself.” – Jarod Hamm

Jack Forinash: How does this Epicenter Citizen Designer AmeriCorps VISTA position in Green River, Utah, fit into your life?
Jarod Hamm: I’m from a small rural town in Kansas and as I’ve lived in and visited other places I’ve come to realize how special it is to have a thriving community in the “middle of nowhere.” I want to be a part of creating and maintaining that environment for the next generation, and I’m interested in seeing how I can do that with design. Hopefully I can use what I learn in Green River to benefit my own rural hometown in the future.

JF: Who are you named after? If not anyone in particular, why did you parents chose this specific name?
JH: I don’t think the name has any significance, but the odd spelling is after my Dad, Rodney. My older brother makes passive aggressive jokes about not being the namesake.

JF: Do you have any siblings? If so, where are you in birth order and how has that affected your view of the world?
JH: I have one brother who is six years older. We were far enough apart that our lives were somewhat separate, and we half-joke that we’re both only children. But I always wanted to do the things he was doing, so I would try to act more mature than I actually was. As we’ve gotten older we’ve become disconcertingly similar, but so far it’s been a good thing.

JF: What about the natural landscape around Green River excites you most?
JH: I really haven’t been west of the Rockies before, so I’m excited to see something totally new and unfamiliar. I’m imagining a Wile E. Coyote sort of vibe. I’m also a big fan of river floating. 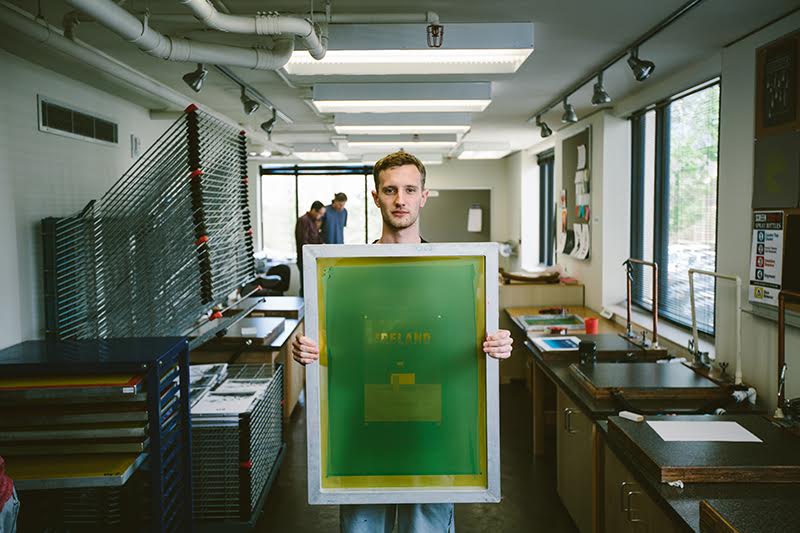 Photo: Hamm in the screenprinting lab at John Brown University.

JF: What book, movie, or person is significant to your work/process/life, and why?
JH: Candide, especially the final chapter. He decides that the only bearable way to live is to cultivate the garden and “work without speculation.” It’s a reminder to me not to get caught up in theory at the expense of actually making something and being useful.

JF: You’re an Aries. Do you invest any credit into the typical attributes of an Aries?
JH: This is the first I’m hearing of it, so I guess I can’t say. After reading a bit, I hope it’s not totally true because they sound kind of abrasive.

JF: Your Myers-Briggs Typology is ISTP. Do you feel it’s accurate?
JH: This seems a lot closer than the Zodiac did. I especially liked the phrase “uncomplicated in their desires,” or at least I hope that’s true of me. Also “interested in how and why things work” I think is pretty accurate. But I don’t know where my “risk-taking/extreme sports” side is. I like having both feet on flat ground usually. I also have no idea how anything mechanical works, and I hope I’m not “detached”…

JF: What would be (or what is) your superpower?
JH: I can sleep just about anywhere, at any time.

JF: What’s your favorite card or board game, and why?
JH: I think it has to be Dutch Blitz. I grew up playing with my family, but we never played by the real rules (I think to compensate for me being younger). I’ve also been workshopping a 21+ version called Dutch Schlitz. I’ll be bringing a deck!

JF: Finally, tell us about the work you’ve been doing with Hope Dies Last.
JH: Last summer, I helped Hope Dies Last in Budapest, Hungary, design a book for victims of sex trafficking to show love and encouragement as well as provide information on human rights and ways to get help. They’ve started printing and distributing 14,000 copies across six languages. People can learn more about what they do and see the book here.

Since then, I worked for Eliberare Design a non-profit agency in Bucharest, Romania, that sells design and web development to fund anti-trafficking campaigns and prevention work.

JF: We’re ecstatic for you to hop on a plane in Romania, fly across the ocean, and join the Epicenter team for a full year, Jarod! See you soon!