Though it was another cloudy day, I was still ecstatic about today’s destination, even as someone who can’t quite ever wake-up without a bright sunrise. The clouds today made the glacial lagoon appear more mysterious than the crisp lagoon photos I’d been studying from afar for years. As I awkwardly slid down the black stone beach escarpment, the sun began to glow orange through the clouds and set on the distant volcanic mountains to the west. And as I reached the water’s edge, my heart skipped a beat as I noticed a pair of seals silently gliding across the lagoon heading towards the massive chunks of glacier crashing in with the tide. After the moment of impact, icebergs make these wonderful creaks and whines as they rub against one another. I hadn’t expected that, it’s not something the guidebooks tell you. I was so intrigued by the microscopic sounds of the ice that I had to get closer so I could make a recording. Before embarking on this trip, I had decided to take less photographs and record sound instead, an exercise in patient listening. The next thing I knew, I was falling into the icy waters. It happened so fast. I cut my hands on the ice as I scrambled to get out of the water. The salt-water burned my new cuts and I could already feel a bruise forming where my thigh had hit a sharp volcanic rock. During this very painful incident, I was fully present in the moment. This was the Iceland I’d been dreaming of, a place of both obvious and breathtaking beauty as well as a place of subtle allure that pulls you in (sometimes literally) and surprises you. Here the possibilities for moments of revelation and self-actualization were seemingly endless. 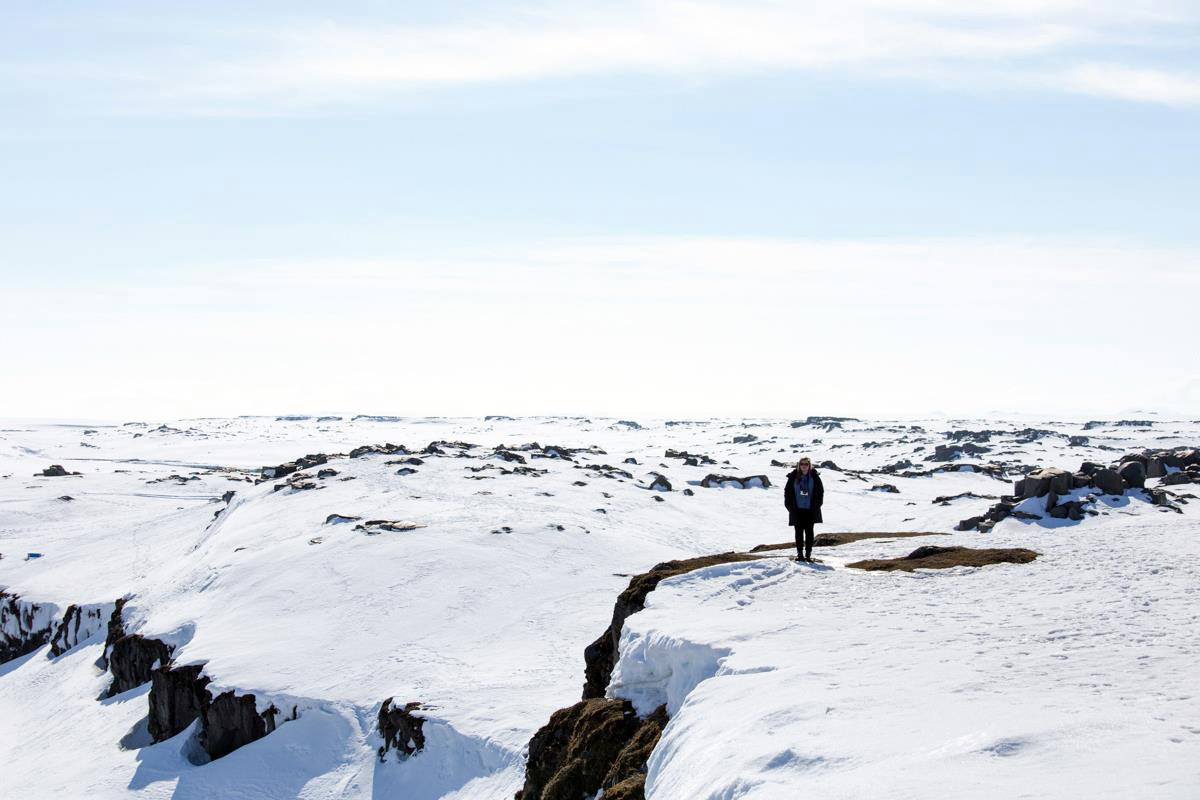 Me in North Iceland. This hike consisted of walking on over 5′ of ice and snow. Photo by Ryan Greaves.

Yes, you read that correctly: Iceland. Epicenter went to Iceland. More specifically, I was invited to co-create an exhibit and seminar/workshop called “Explore. Reflect. Respond: Designing for Small Communities” as part of DesignMarch. DesignMarch is Iceland’s most important annual design festival. Organized for the sixth time this year, it was be the largest and most significant yet, with over 100 events that transformed the most northerly capital in the world into one big venue for design. From fashion to furniture, architecture to food design, the festival showcases the best of the local design scene alongside exciting international names, opening with DesignTalks, a day of lectures by internationally acclaimed designers and the foremost local design thinkers. DesignMarch is organized by Iceland Design Centre, the promotion agency of Icelandic design and architecture. Epicenter’s exhibit and seminar was done in collaboration with a group of like-minded designers from around the world: Daniel Byström (Designers & Forests, Sweden), Lára Vilbergsdóttir (MAKE by Þorpið, Iceland), Pete Collard (Design Museum, UK), Karna Sigurðardóttir (MAKE by Þorpið, Iceland), and Jason Dilworth and Megan Urban (Designers & Forests, USA). In the event “Explore, Reflect, Respond” we shared our experiences using design as a tool for regional development. Our work is connected ideologically through our experience of community based design practices, and much of this group (Daniel, Pete, Lára, Megan, and Karna) originally got together during a traveling conference exploring the cultivation of a new creative community in East Iceland called “Make It Happen.” Out of the “Make It Happen” conference, two significant projects were formed: Designs From Nowhere and Designers & Forests.

Designs from Nowhere explores the possibilities for small-scale design and production in East Iceland, using locally sourced materials (e.g. stone, seaweed, reindeer horn) and skills (e.g. net making). The exhibited work was created following a series of workshops that took place in Autumn 2013 featuring the designers collaborating with local practitioners in Egilsstaðir, Djúpivogur, Eskifjörður and Norðfjörður. The products were presented for the first time at Spark Design Space during DesignMarch 2014.

Designers & Forests is a small group of interested individuals from the US and Sweden engaging in a conversation about design and forest environments. Designers & Forests visited Utah in the summer of 2013 to explore the forests and communities affected by beetle kill and aspen die-off. After Utah, they returned home to create products in their own studios: flooring, a stool, a lamp collection, longboards, storytelling iconography, and a wool blanket.

The world of social designers is a small one. Since meeting back in 2010 through Rural Studio and Project M connections, Jason Dilworth (Designers & Forests) had continually told me that I had to visit East Iceland and see all that was happening with designers and artists working in rural communities. Specifically, he was speaking of the work of MAKE by Þorpið, a collective focused on making use of local materials and human resources of rural East Iceland enhanced by international perspectives. And, when Jason brought the Designers & Forests collaborative through Green River and it all clicked for me. Together, we recognized the connections in our work (including the similarities to East Iceland) and we wanted to bring it all together for discussion in Iceland. I didn’t need any excuses to visit the land of elves, Björk, Game of Thrones, and breathtaking landscapes. Iceland was a place I have been wanting to visit for over a decade. Six months later, we were all presenting our ideas in Iceland together at DesignMarch.

The seminar and workshop took place in Reykjavík, and the audience, and workshop participants, consisted of a mix from designers and members of communities and municipalities from all around Iceland. It was an intimate gathering during which ideas were shared and new friendships were forged. We have hopes that new projects will be formed through the new partnerships forged at the gathering, much like the “Make It Happen” conference. Already since DesignMarch, I was invited to present in East Iceland and visit MAKE by Þorpið’s facilities. 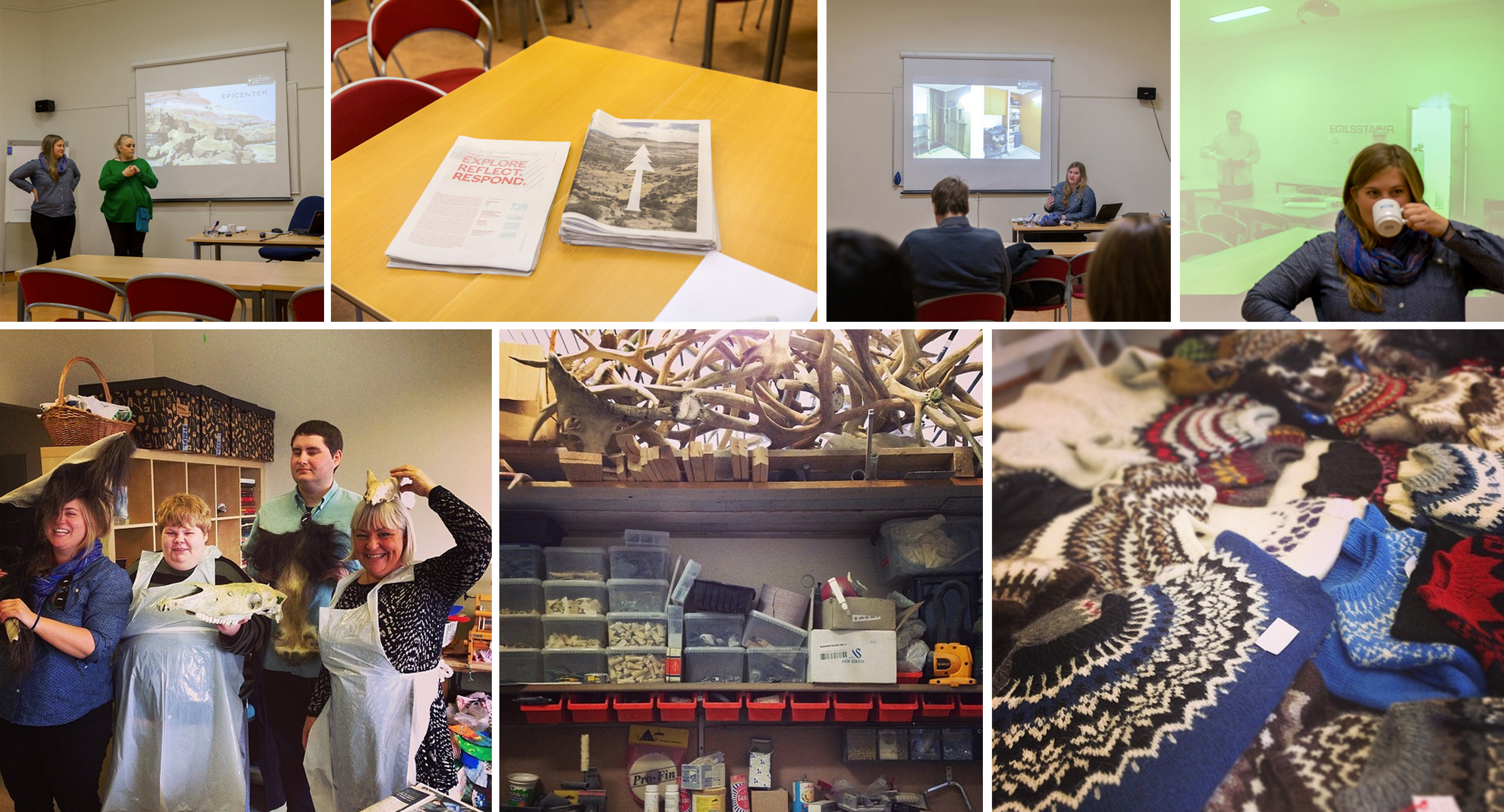 Maria presenting in Egilsstadir and other adventures in East Iceland.

Visiting Iceland was significant for many reasons for me. Primarily, this trip granted me genuine connections with local Icelanders. For example, the Deputy Mayor of Ísafjarðarbær (Þórdís Sif Sigurðardóttir) in the West Fjords told me she was inspired by my presentation at DesignMarch to create a Frontier Fellowship of sorts in her community. And, Lára Vilbergsdóttir, the brains behind MAKE by Þorpið, introduced me to educators, artists, and designers in East Iceland, and she gave me a tour of their wood and reindeer antler workshop in Egilsstaðir. Through these connections I was able to learn about many of the challenges and strengths of rural Iceland, most of which reminded me of Green River. Somehow, Iceland isn’t so different from Utah. I’m hopeful for future conversations and collaborations with these like-minded Icelanders and Epicenter in the near future.

This trip allowed me to take a step back from the work we’re doing at Epicenter. It allowed me to see more clearly than ever that Epicenter is part of something bigger, a change of tone occurring in the design professions internationally. Designers are passionately realizing their responsibility to people and place as well as the advantages of working from within small communities. More than ever, creative people are connecting local resources, utilizing international ideas, and working together to improve the quality of life for small communities. This trip made me very hopeful about the future of design.

And, finally, yes… Iceland is as magical as the sagas we’ve read and photographs we’ve seen. In addition to the DesignMarch conference, I was fortunate enough to drive the circumference of the entire island nation and experience its dramatic landscapes and fascinating subcultures. I had adventure-packed two weeks of harbors, ocean-side villages, seafood, Icelandic hot dogs, hot springs, glaciers, scandinavian architecture and design, hidden folk, volcanoes, waterfalls, pizza, the northern lights, Brennivín, columnar basalt formations, glacial lagoons, black sand beaches, snowy fjords, fashion shows, Icelandic nightlife, reindeer, seals, ice cream, and geysers. All of these other-worldly experiences will inspire my work at Epicenter for months to come. Thank you, Iceland, for being everything I’d dreamed of and more. 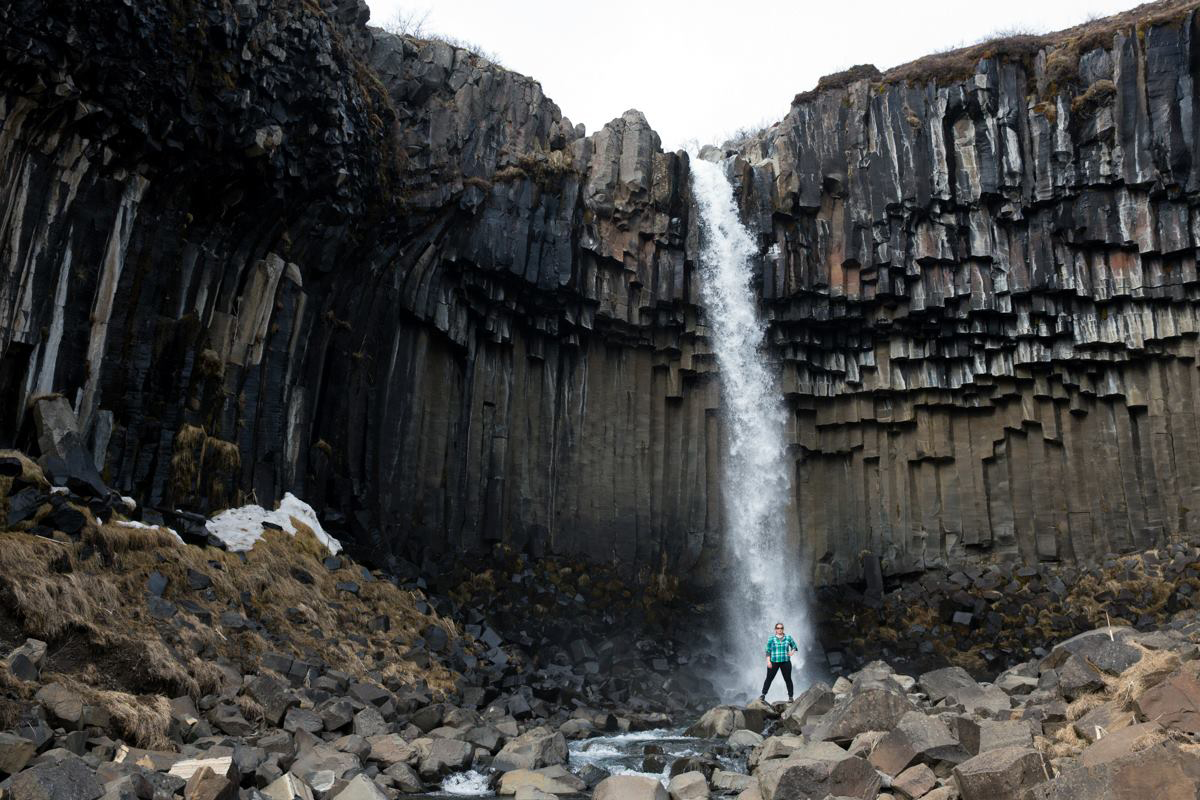 Me falling in love with columnar basalt at Svartifoss in Vatnajökull National Park. Photo by Ryan Greaves.

A special thanks to Ryan Greaves of Cabin-Time, my travel partner and a great photographer who made the trip easy and full of explosive laughter.