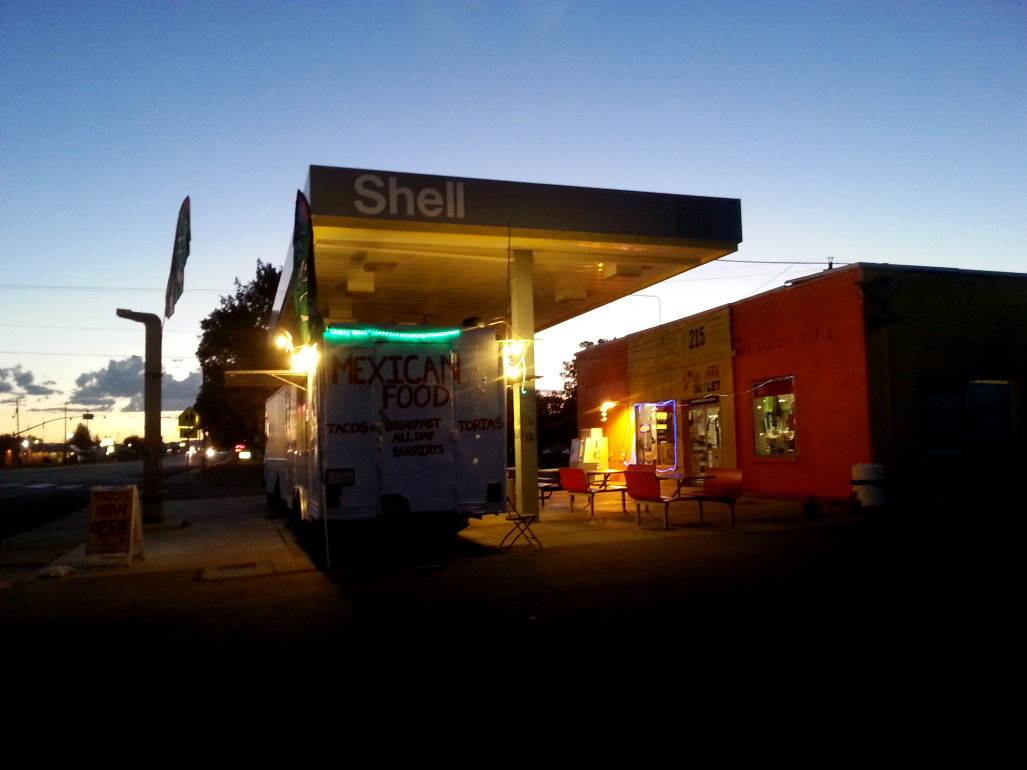 Looking west towards La Pasadita at dusk, circa Summer 2014. (Click to enlarge.)

Maybe La Pasadita has always been less a place than an idea and a vision. The idea that positive change could come to the small and remote desert town of Green River, Utah. The vision that its grounds could become a space that fostered and promoted the development of a vibrant community. And that the catalyst for bringing the idea and vision to life would be delicious tacos.

Green River’s downtown area has evolved and devolved and shifted locations over time, but in today’s Green River, it might be safe to say that downtown is centered around the stretch of East Main Street that includes the post office, Chowhound, Green River Coffee Company, and O.K. Anderson Park. La Pasadita, located next to the park, has come to be a contributing member of this central downtown area. 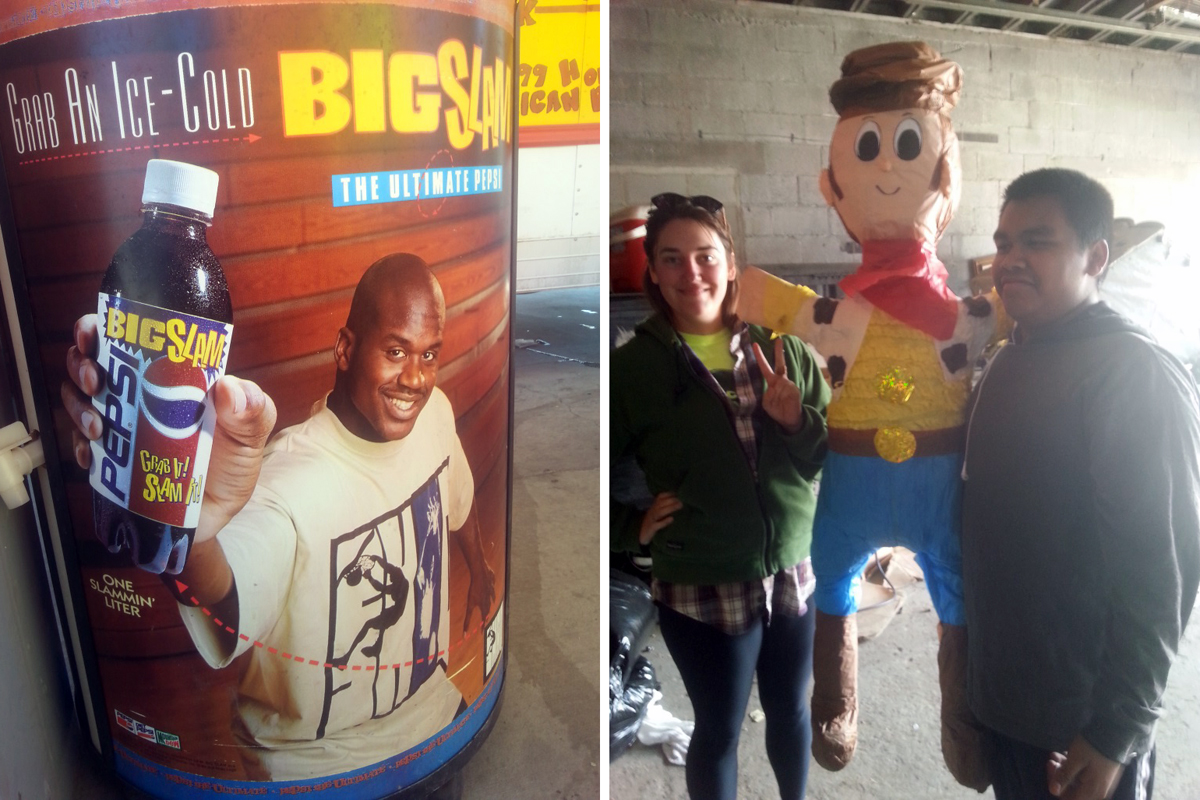 La Pasadita originally opened in March 2013 as an outlet store that sold a wide assortment of merchandise, largely of the Mexican variety. The store was located in a building that previously served as a Shell gasoline station. The building was painted with bright orange and yellow colors that catch the eye of anyone passing by. Later that year, a taco truck was added under the canopy in front of the building that once sheltered Shell customers as they fueled up. Tables were put where the cars once parked and the old gas pumps were wrapped in plastic. This former gas station setup is certainly unusual, but it adds quite a bit of character to the place and serves as a simple example of historic reuse.

L to R: Some of the many delicious food items available.; Creative reuse of a formerly abandoned site.; The eye-catching bright and bold yellow and orange colors of the building.; and Tacos sign. (Click to enlarge.)

La Pasadita is not only my favorite restaurant in town, it is one of my favorite places in general, and I’m not the only one who holds it in such high regard. As the highest rated Green River restaurant on Yelp, and as the restaurant with the highest average ranking on TripAdvisor, La Pasadita has quickly become a top destination for locals and for those passing through, the latter being referenced in the name of the establishment. 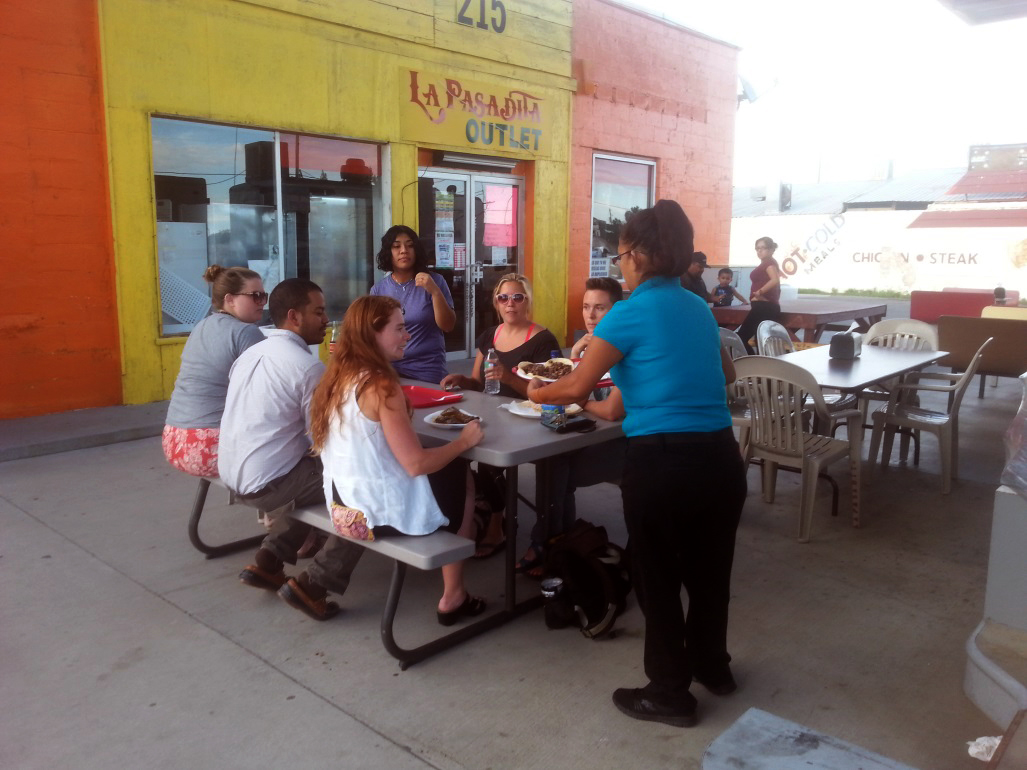 Our friendly server brings out food to eager and hungry customers. (Click to enlarge.)

Beyond simply preparing and serving good food and selling miscellaneous merchandise, La Pasadita has made efforts to become a gathering spot for locals and others by hosting dances and sporting event viewing parties, for example. It has employed simple principles of creative placemaking and has been largely successful. Green River is lucky to have such an establishment. I have many great memories of their food, their events, their customer service and hospitality, and I look forward to visiting La Pasadita in the future.

L to R: Roughly 100 people attended La Pasadita for a showing of a boxing match in early 2015.; The kindly proprietors allowed me to come inside and watch the closing minutes of the Auburn vs. Kansas State football game on September 18, 2014 without even making me buy anything.; and A child shoots a toy gun at a Power Rangers villain on television at La Pasadita, circa Fall 2014. (Click to enlarge.)

This blog post was written by our out-going AmeriCorps VISTA, Orion Stand-Gravois. His unique perspective and his insight into community planning will be greatly missed at Epicenter!!