“It would take several more lifetimes to become literate here; my passage will only carry knowledge like a strong taste on the tongue.” -Ellen Meloy, “Raven’s Exile” 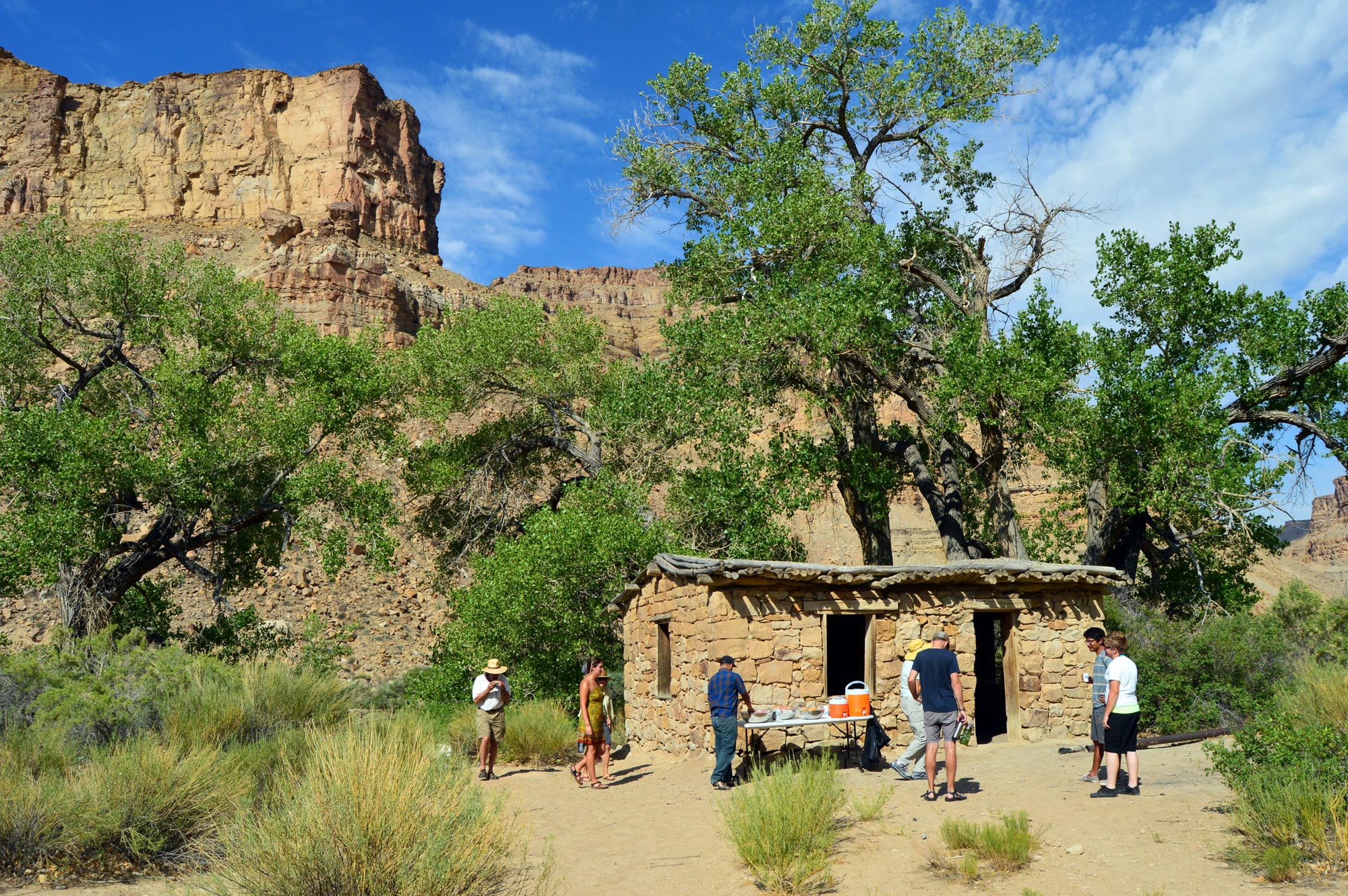 Gathering at the Stone House for the riverside readings.

Her voice filled the stone house. “Turquoise,” she said. Breaths were held and wind came through the wood-framed windows, windows where people perched leaning into the words that slowly flowed toward us.

Ellen Meloy was a desert writer of place. A writer with a wit and curiosity and passion unparalleled in the nature writing genre. As the fund in her honor writes, “Ellen breathed the desert air and wrote. Her voice was strong and sure because her inspiration was direct.” This voice gave birth to four books: Raven’s Exile: A Season on the Green River, The Last Cheater’s Waltz: Beauty and Violence in the Desert Southwest, The Anthropology of Turquoise: Meditations on Landscape, Art, and Spirit, and Eating Stone: Imagination and the Loss of the Wild. All collections of essays, these books have added a substantial depth to desert writing. 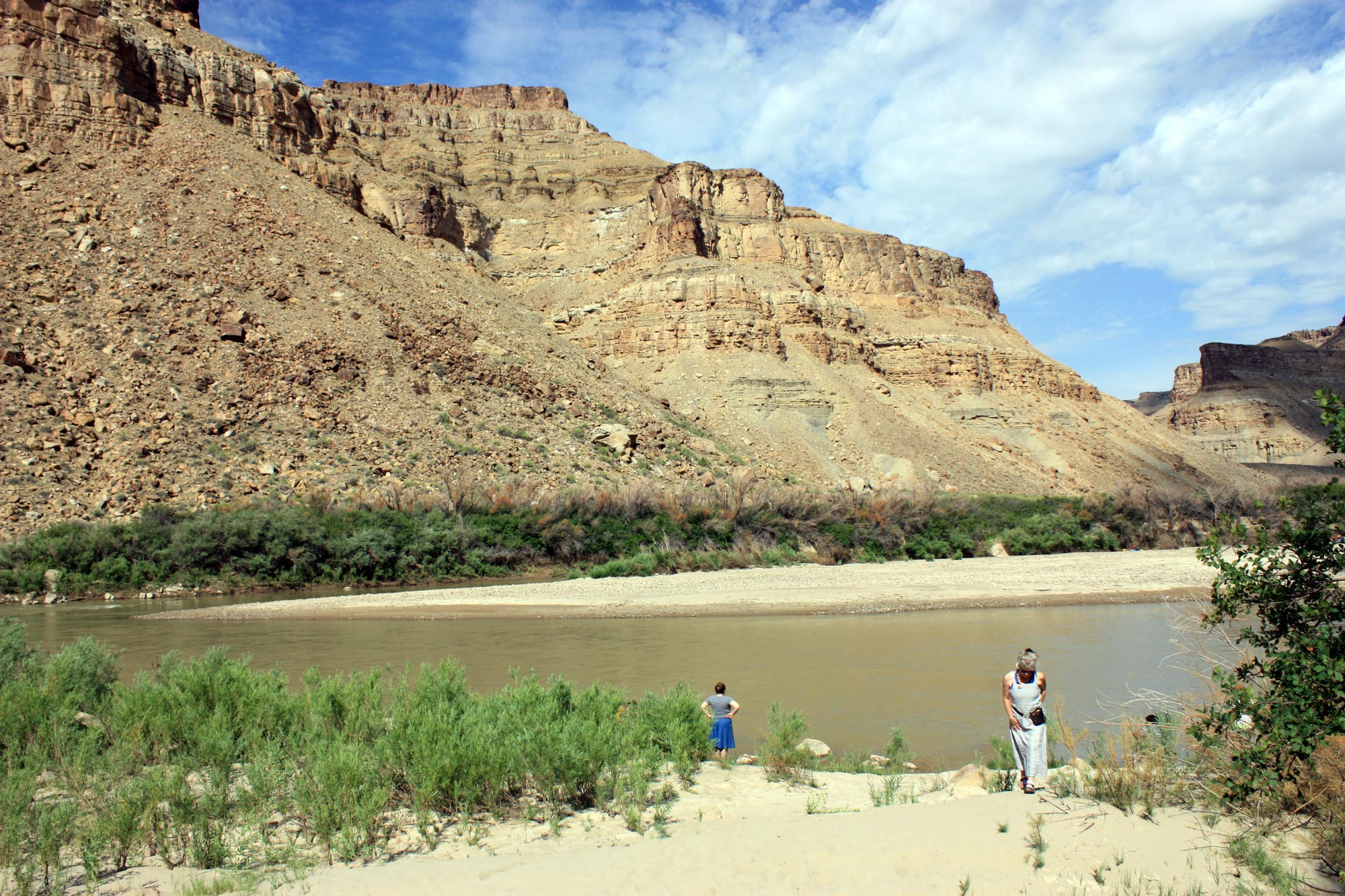 Wandering down to the river bank.

This year, 2014, marks the twentieth anniversary of “Raven’s Exile: A Season on the Green River.” It also marks the ten year anniversary of Ellen’s sudden and tragic passing. With that knowledge at heart, Epicenter and the John Wesley Powell River History Museum decided to honor Ellen and her legacy along our river.

The event, called, “Raven’s Return: A Literary Tribute to Ellen Meloy,” began on the evening of July 25th and continued throughout the following day. Four of Ellen’s closest friends, artists and writers in their own right, traveled to our dusty desert town to share stories and words of Ellen’s legacy and the river. Ann Weiler Walka, a poet of Flagstaff, AZ, started the event off on Friday evening with a reading from Ellen’s “Raven’s Return.” Individuals from as far as Provo, Bluff, and Colorado came to hear her read. 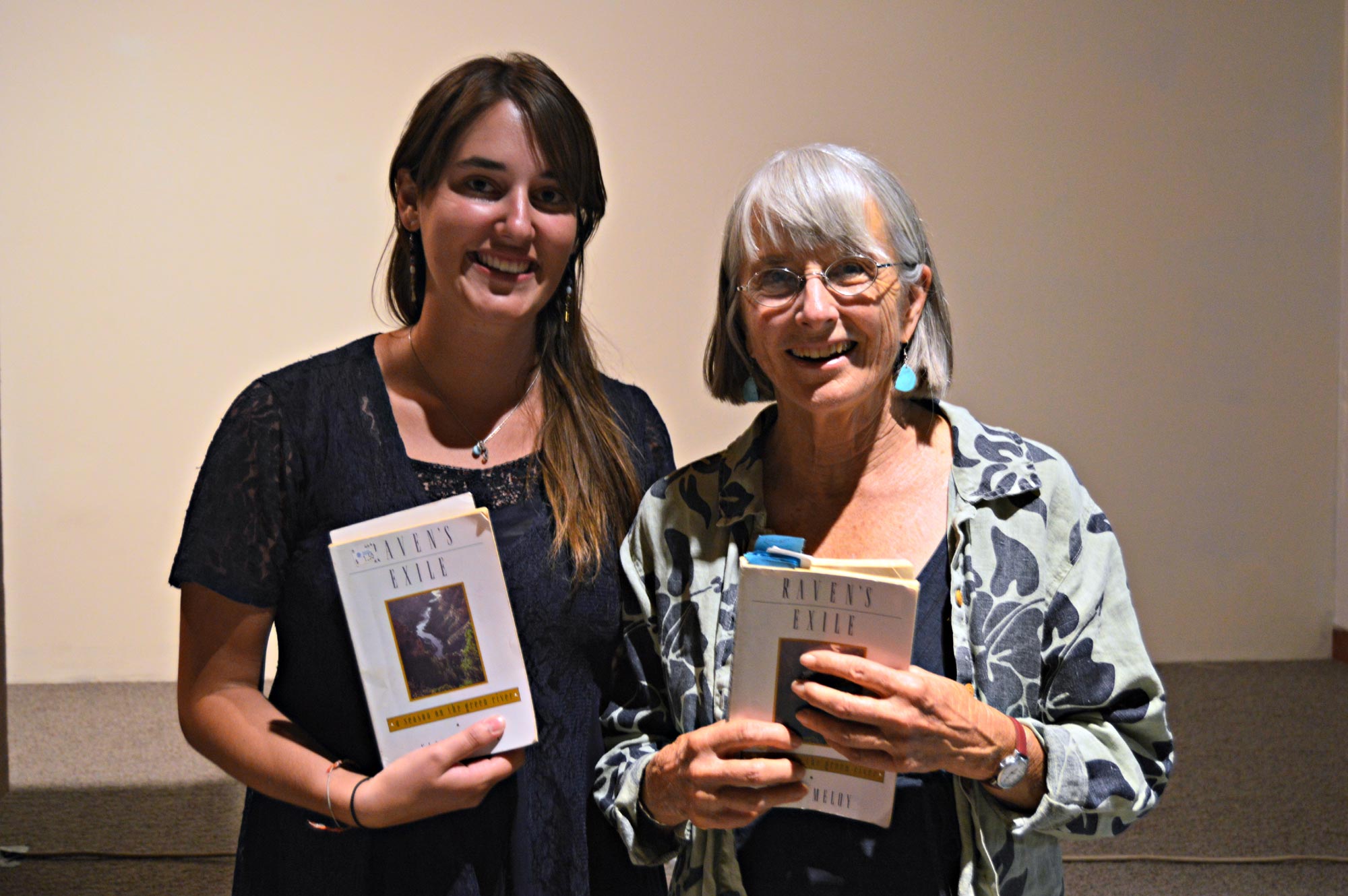 The next morning a caravan bumped up along the dirt road towards Lower Gray Canyon and the Stone House along the river. Fresh cut local watermelon awaited guests and most were immediately drawn down to the water’s edge. Clouds kindly lingered in the sky, gifting a coolness to the air. Slowly, without an announcement, the Stone House began to fill and so our riverside readings began. There was a slow gait to our pace. Clouds ebbed away, leaving that blue sky open as a hard contrast to the Book Cliffs that cradled us in the canyon. Ages ranged from one year to sixty plus. Voices were soft and it felt as though Ellen was sitting right there with us, maybe perched up on the wooden roof, smiling her trickster coyote smile.

Greer Chesher, author of “Heart of the Desert Wild: Grand Staircase—Escalante National Monument”, was the first to read and surprised all there when she pulled out a recording of Ellen doing an interview with NPR. Everyone sat, silent against the metal framed chairs and listened to Ellen’s voice. Her voice filled the stone house. “Turquoise,” she said. Breaths were held and wind came through the wood-framed windows, windows where people perched leaning into the words that slowing flowed toward us.

When the interview concluded Greer shared her own story, written about Bluff, but mainly about Ellen. Greer met Ellen through an exchange of funny postcards and now is a board member for The Ellen Meloy Fund for Desert Writers.

Next came Elizabeth Grossman, author of Chasing Molecules: Poisonous Products, Human Health, the Promise of Green Chemistry. Lizzie met Ellen on the river and chose to share a piece she wrote after Ellen’s passing. Her dress was a beautiful burnt orange which she said, “I thought of Ellen when I put this on this morning. There was this one great passage in Raven’s Exile where Ellen described wearing a bright orange bikini, looking like a safety cone floating down the river.”

Third to share that morning was Joe Pachak, artist and archaeologist from Bluff, Utah. He slowly sat down, turned his eyes up towards the audience, and began,“I’d like to tell a story, a story that I’d like to tell Ellen. That is what we did. We told one another stories…” Joe wore his heart on his sleeve and drew everyone in to each of his woven words.

Ann Weiler Walka was the last to read that morning. Sharing poems she had written for Ellen and never publicly read aloud, her soft voice filled the room with images of Ellen, desert rock, and coyote clans. At her conclusion, Terry Tice, friend of Ellen and fellow Bluffite, stood and shared a moving story of the night Ellen passed. Strange celestial happenings filled the skies in the weeks to follow. Coyotes cried in his yard, mourning. 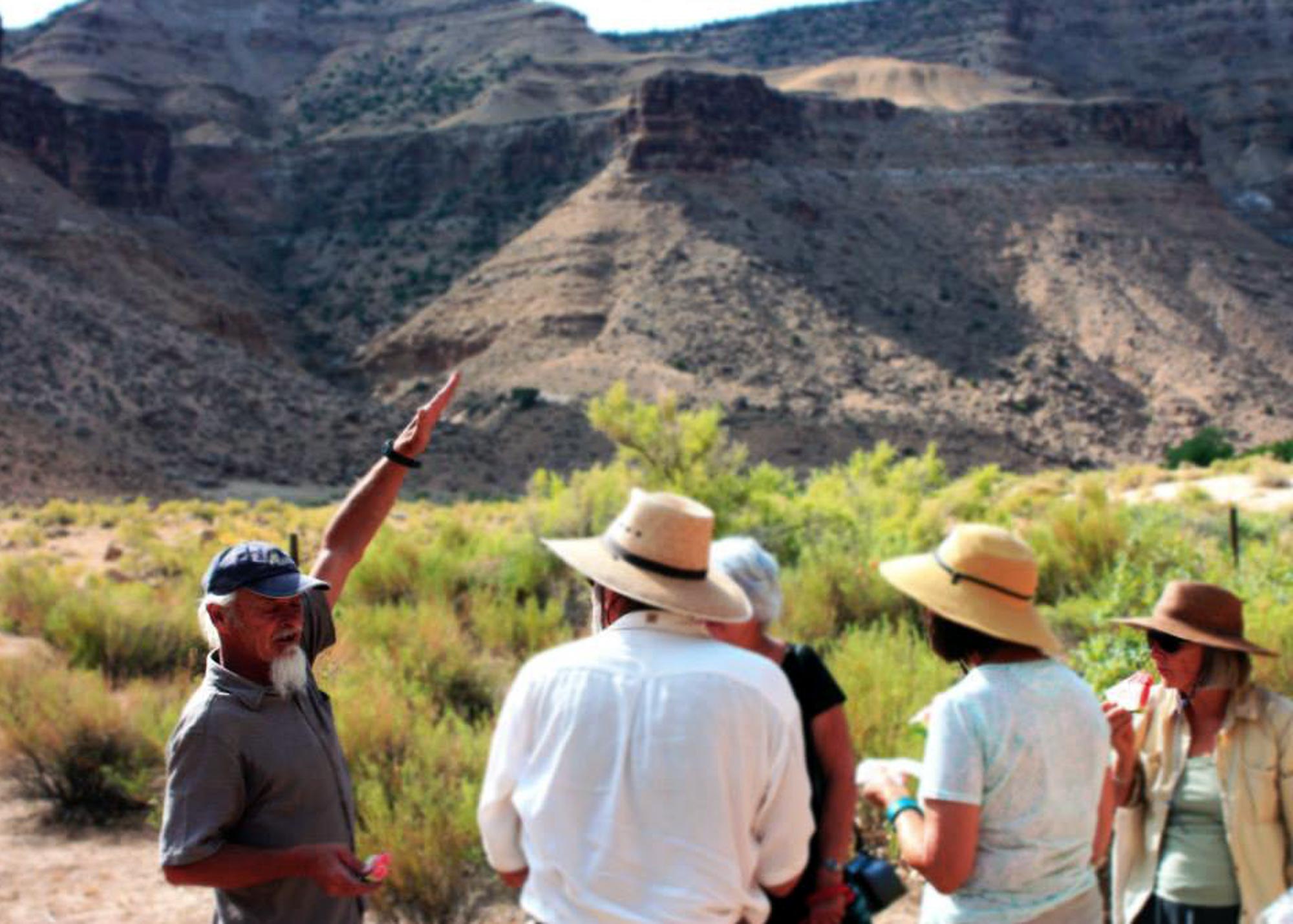 Joe Pachak tells a story in the canyon.

And then, there was the river. In the true spirit of Ellen, about ten of us inflated our duckies, tubes, and paddle boards to float the Green down to Swasey’s Beach. It was the perfect river day. The water was refreshing like it can only be on a hot afternoon in late July. Ellen wrote in Raven’s Exile, “The canyon is so beautiful it hurts. De solare, to make lonely, yet never do I find loneliness in Desolation.” 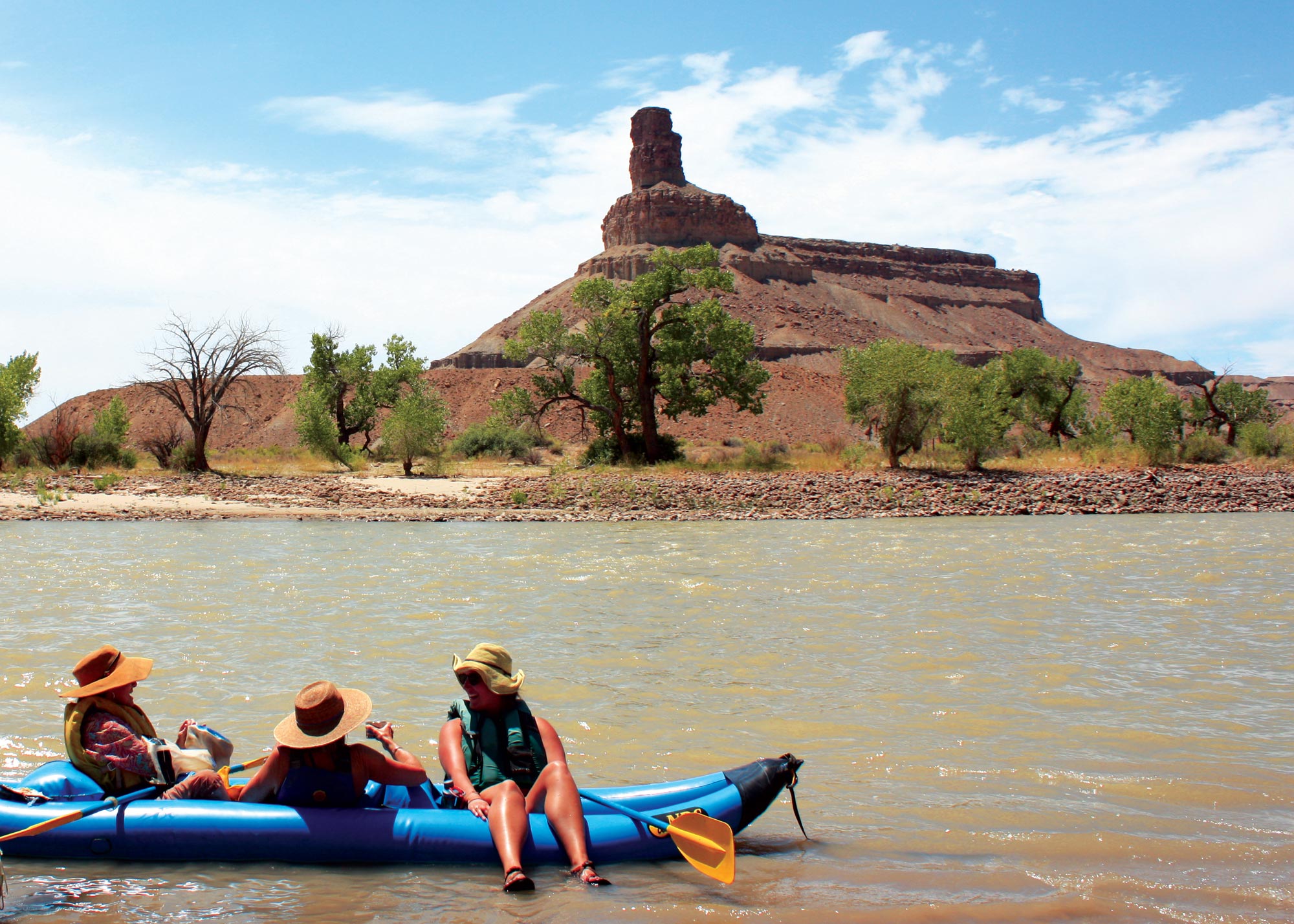 Greer Chesher, Ann Weiler Walka, and Ryann Savino relax on the bank as Swasey’s Beach after their river run.

The final portion of Raven’s Return brought us back to the John Wesley Powell River History Museum. All gathered in the art gallery to share in a panel discussion centered on the idea of return –returning to Ellen’s work and returning to desert rivers through writing. Ann, Greer, Joe, and Lizzie thoughtfully conversed while others listened and engaged. It felt like the perfect capstone to a weekend in honor of Ellen Meloy’s legacy and our shared future. 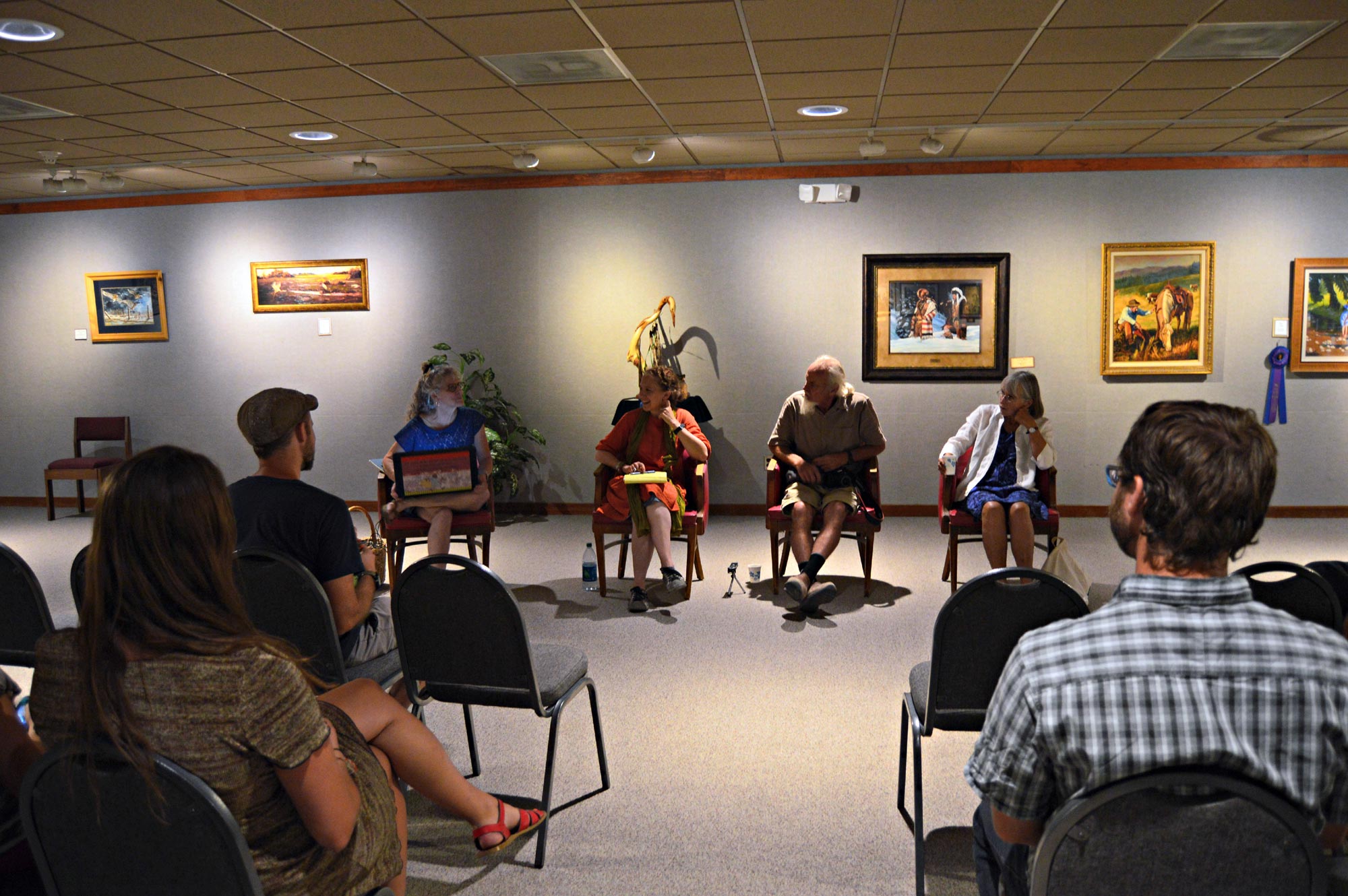 Raven’s Return became so much more than myself or Tim Glenn, Museum Manager, ever dreamed it might be. The whole process felt like an honor and, as Ann Walka noted, “a team effort”. I must graciously thank Mark Meloy, Don Snow, and the board of the Ellen Meloy Fund for Desert Writers for their time and support. Without you all, this event would not have been what it was. To Greer Chesher, Lizzie Grossman, Joe Pachak, and Ann Weiler Walka, thank you for coming to our dusty desert town and sharing stories along the river. Ken Sanders Rare Books, Utah Humanities Council, Utah State University Eastern, The Tamarisk Restaurant, and Robbers Roost Motel, thank you for your donations and support. To everyone who came, who drove hours over mountain passes to share in the spirit of Ellen, thank you; I am so glad you were there. To Tim at the John Wesley Powell River History Museum, thank you for believing in Raven’s Return as much as I did, it was such a joy to work with you on this. And lastly, to Ellen, thank you for your words and your legacy. 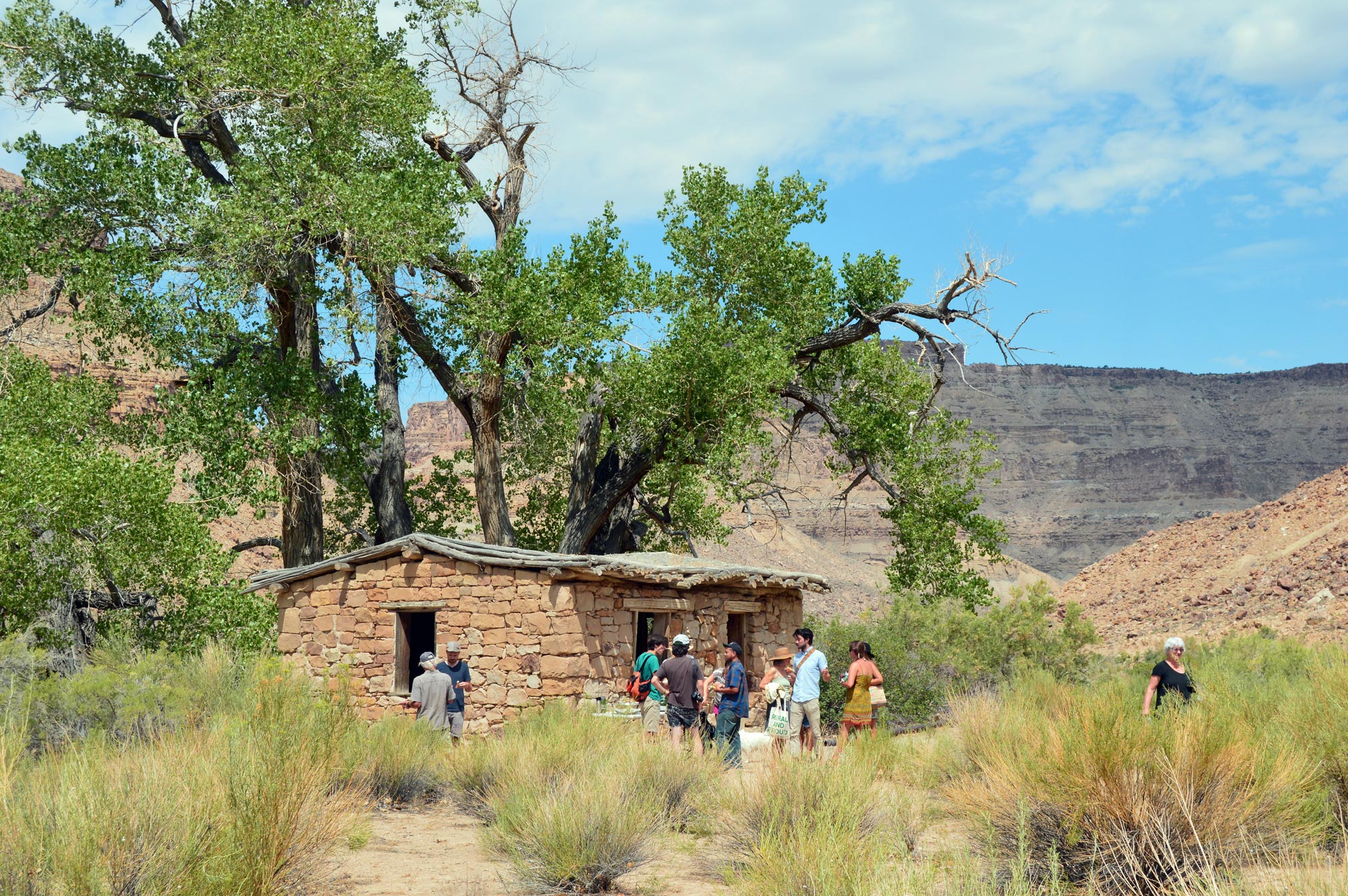 Friends enjoy watermelon and stories after the riverside readings.

—This post was written by Ryann Savino, AmeriCorps VISTA here at Epicenter from August 2013-14. Ryann first read Ellen Meloy’s work while canoeing down the Green River through Labyrinth Canyon. She has been hooked ever since.