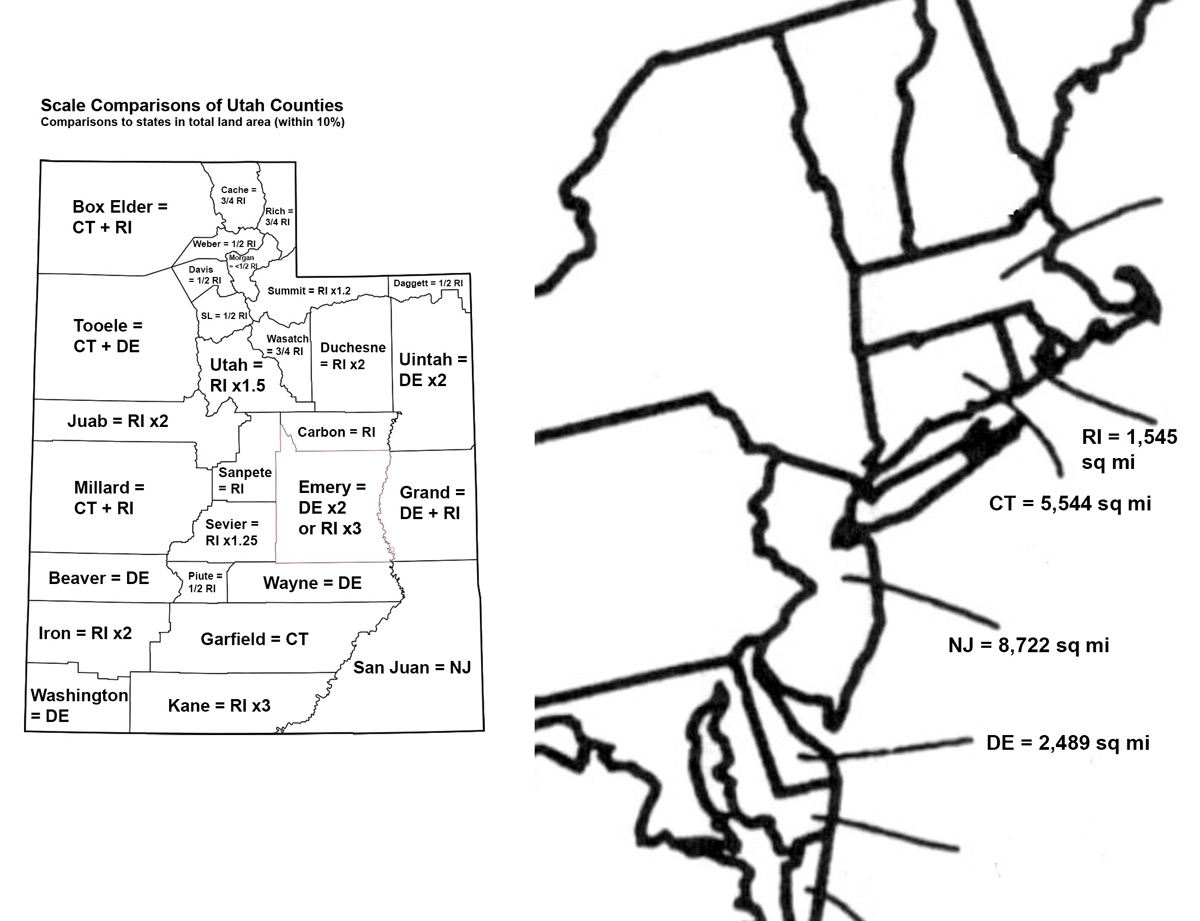 The scale’s different out in the American West.

“Frontier” is a term the US Census has defined as having less than 2 people per square mile. In Utah, 6 out of 29 counties are quite literally frontier counties. The population in these counties, and in Emery County, is focused on small communities of 1,000, 200, or even under 50 people. It’s a different “rural” out here. There are towns where the population gathers in communities. The City of Green River, as an example, has 952 people living in 12.5 square miles, creating a density of 78 people per square mile. Just outside the city limits, not 10 miles away from Epicenter, there are no houses or homesteads for miles and miles. This version of Rural America has vast distances between settlements with literally no built environment in between (other than perhaps a road… maybe). A sign at the east interstate exit to Green River says “NO SERVICES FOR 110 MILES.” This stretch of the interstate (I-70) from Green River to Salina is the longest stretch of interstate in the lower 48 (contiguous) United States without services.

Green River, and these other western towns, are outposts, waypoints, and staging points for travelers. And we’re a base point for adventures and even just for daily life; we gather supplies, go out into the desert, then come back. Even prospectors and miners of lore needed and met up in these small towns, gathering equipment and information. They went out for weeks and sometimes months at a time, living in dug outs, lean-tos, and natural caves (see Sego Canyon). A built house was rare, and those people most often became known as hermits.

Reflecting on the conception that Western counties are the size of northeastern states (often multiple times over) but so sparse you can throw a rock and you won’t hit anyone (and no one will hear it), issues of power and influence are put into perspective. Rhode Island, as an example, has four congressmen, Delaware three, Connecticut seven, New Jersey fourteen. Utah, with a land area 4.6 larger than RI, DE, CT, and NJ combined, has six congressmen. (Shall we propose a House of Representatives based on land area?!) In Utah, 90% of the population lives on 10% of the land (and conversely, obviously, 10% of people live on 90% of the land). This “rural” land is the land that we all recreate on, that we extract minerals from, where our water and air is filtered, land that we take endless photos of its pastoral nature, wide expanse, and endless natural beauty. It’s where we go to refresh, where we retreat to. Yet, as the political system is set up, this area (my town) has limited influence on what happens to itself. Our US Representative Jason Chaffetz’s territory covers an area from Cottonwood Heights (just south of Salt Lake City) to Bluff and the Navajo Reservation in San Juan County. It would take 5 hours and 24 minutes to drive those 329 miles. Anyone in Providence, RI think they have the same political, environmental, economic, or community concerns as someone in Dover, DE, or Rochester, NY, or Tuckhannock, PA? Because that’s the same distance from Cottonwood Heights, UT to Bluff, UT.

People who are making the decisions are concentrated on the wealth and population centers of the nation and of each state. Utah, with 75% of the population living in the four counties that make up the SLC metropolitan area, is no different. It would do us all good to respect the individuality of “the rural” a bit more. Stop lumping “rural” together, and stop posturing it as if there is a clear line between polar opposites of “rural” and “urban.”

Come visit us in person for an afternoon. That’s a start. The recent visit from the Utah state legislators was impressive. Apparently there used to be this tour of a part of rural Utah each year until 2008’s recession. We hope it continues. And we hope they, and you all, visit us again and stay longer, ask more questions, and listen to the community. Blanket statements about “Rural America” are invalid. Green River is not Moab, not Bluff, not Ephraim, and certainly not Cottonwood Heights. My rural is not your rural. My America is not your America.