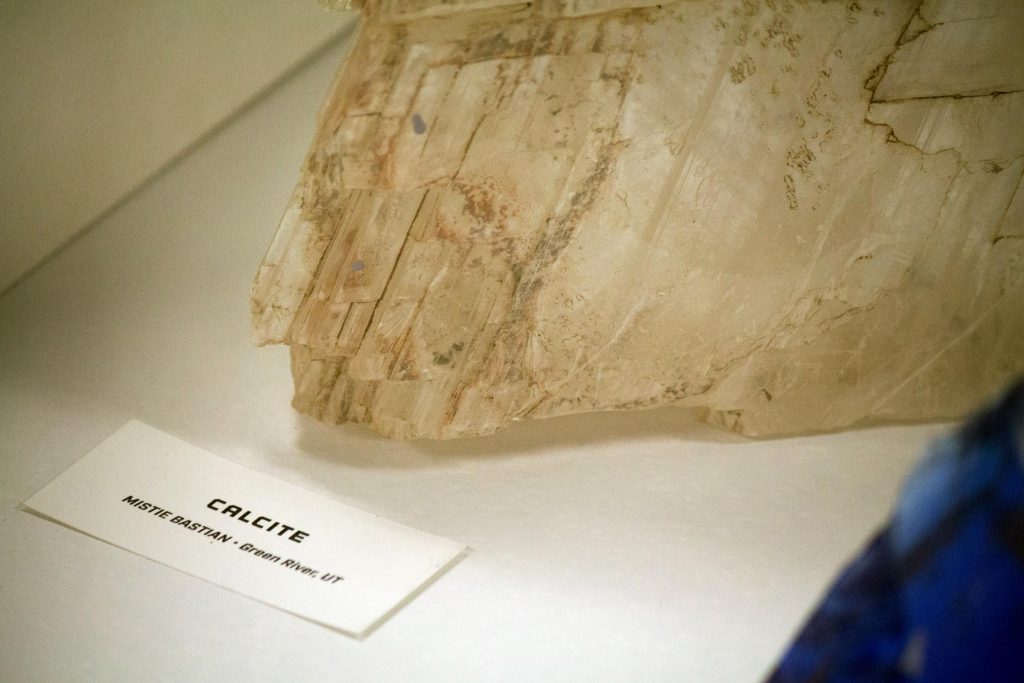 “My Favorite Rock” is a collection of regional residents’ favorite rocks and the stories attached to them. Through the gathering of these stories, we came to realize what those interviewed already knew: these rocks are more than rocks. They’re the embodiment of memories, bridges to the natural world, sources of hope and comfort, and ancient unchanging objects in an ever changing world. Thank you to everyone who shared their rocks and stories with us.

The rocks and stories were displayed on April 1st & 2nd at the entrance to the JWP River History Museum in conjunction with the Green River Rock & Mineral Festival. This project was inspired in part by recent work by Frontier Fellows Kirsten Southwell (“The Romance of Mining”) and Pete Collard (“This Is Green River”). Click here to download the “My Favorite Rock” booklet. Bonus: Below you’ll find one rock that we were unable to include in the exhibit for reasons included in the text. 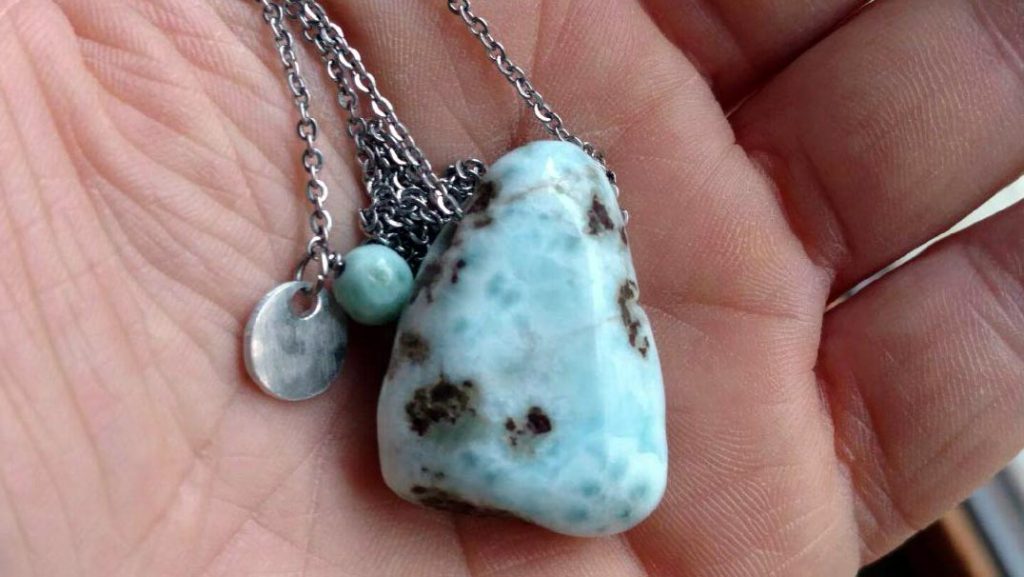 Serah Mead’s Larimar (Moab, Utah)
How would you describe the rock?
It’s larimar, a colorful gem stone and a rock only found in the Dominican Republic amongst basaltic lava. But, it’s very different from lava and looks like the opposite of what you would expect it to look like. The rock comes in a lot of different forms, but the kind I like the most is the one I have — a beautiful glacial blue and green. There’s a lot of variation in color and tone in every larimar piece I’ve seen, and in some of them, it looks like you’re looking into a piece of ice or glacier from above; cloudy in color with splinters of blue. It’s worn by women in the Dominican Republic. The lore is that it has really good properties for pregnancy, delivery, and postpartum.

How and when did you get it?
I’ve only had this rock for a month but have been wanting one of this type for a long time. Right around the time I was pregnant, I got into learning about what’s part of pregnancy in different cultures. I was in Portland, Oregon, at a rock shop and asked these bejeweled women who work there about rocks that aided pregnancy. One of them pulled out a book and turned to the page describing larimar. Not only was I psyched to learn about a rock I hadn’t heard of before, but also of how beautiful it was. It was the first time I remember looking at a rock, being taken by it, and feeling something for it.

I grew up around rocks and gems, always found meaning in them, but I felt this rock was special. People’s deep love for particular rocks started making sense to me. It was like looking at an ocean galaxy. I didn’t buy larimar in the store that day because it was really expensive, and ended up getting a piece of moonstone since it was too associated with pregnancy. But, I knew I wanted to get some larimar before my pregnancy was over. Last month, my friend mailed me a piece: a chunk of it with a long chain that I now wear.

How do you display this rock?
It rests on my belly and when I look at it, it’s like looking down on a frozen ocean in a tiny world. I connect with the ocean a lot (being from the Northern California coast). This last month of pregnancy feels a lot like sitting on the bluffs, looking out on the Pacific Ocean. There’s some places you can see the curve of the earth — it’s vast, untouchable, and unknowable — but you could also walk five feet forward and know what the ocean feels like, tastes like. One the one hand, I know everything about it, but on the other, I know nothing at all. I’m part of this whole lineage of who have given birth; it’s in the core of my bones. But at the same time, I’ve never done this before.

What does this rock mean to you?
It’s been an anchor for me in this last month of pregnancy and has centered me a little bit. I have a daily ritual of taking it off and putting it on. Even if the rock is away from me, it doesn’t mean that I have less connection to it…it doesn’t lose the meaning that it has.

If this rock could talk, what would it say?
This point of pregnancy is a really liminal space to be in: between maidenhood and motherhood. Beside the metaphorical thing, this is a rock that other pregnant women have worn throughout history. And now you’re on the same boat.